Review: I Spy the Illuminati Eye by Sheila Keenan 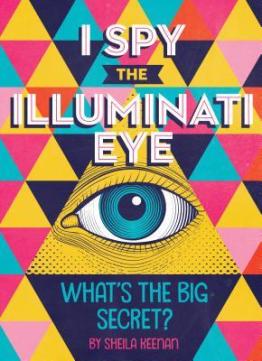 Enlighten yourself with this fun guide to the all-powerful, all-knowing, all-seeing secret society.

This irreverent, illustrated guide takes a look with an all-seeing, skeptical eye at the history and mystery of the cultural phenomen

on that’s got middle-school kids flashing finger triangles and scrutinizing dollar bills for signs of the Illuminati. It’s the first pop culture companion to the shadowy group behind everything from the French Revolution to Jay-Z’s fabulous rise. How did an eighteenth-century philosophical society infiltrate governments, banks, the media, the military, Hollywood, and hip-hop? . . . Or did they?

Kids everywhere want to know who’s in, who’s not, and what all those signs, symbols, and secret rituals are really about.

Is it all really real? Find out in this fun guide to all things Illuminati.

I Spy the Illuminati Eye is a mixed bag for me to review. On the surface I think it’s a fun little way to start a discussion about fabricated news, critical thinking, research, and history; but if I dig a little deeper I think this book has a few issues that I think might make it a hard sell to parents.

Let’s start with what it is and what works well. I Spy is a short little book filled with information about the Illuminati, Free Masons, the Age of Enlightenment, and the conspiracy theories that have spawned from those groups/ideas. We get to learn about the actual secret societies that popped up in history, as well as if they still exist in any provable context like the Free Masons. It also delves into what makes people believe conspiracy theories and how to pick them apart. As a kid, I was super into secret societies, to this day I have maintained a desire to infiltrate the Free Masons. I mean it’s a joke now, but as a kid, I loved the idea of secret societies in general. I didn’t really believe they were orchestrated the world or any nonsense like that, it was more than they had secret codes and meanings and I was super into that. So this would have been right up my alley, because not only does it contain that info but it teaches you how to make invisible ink and shows examples of the codes used.

Where I think this book will be a hard sell lies first in the cover. Nowhere on this cover does it say anything about its true nature of critically analyzing these theories with a tongue-in-cheek attitude. It basically looks like a pro-conspiracy theory book, which most parents are probably going to be a little hesitant to give their impressionable kid. The other thing that gets little wiggly, is the tone of the book. As a super sarcastic adult, I get every instance of sarcasm and witticism in here; but there were instances that make me wonder if a kid would get it. Undoubtedly most of the sarcasm and jokes are pretty obvious but it does skirt that line a few times.

Overall, I think this one has the capacity to be super fun and a really good one to use as a jumping off point to discussions about critically analyzing information given to you. It would be a great one to buddy read with your child, or pre-read, and then do little activities like making invisible ink or code-breaking games alongside. I just desperately wish the cover had anything to let people know that it’s not a manual on being a conspiracy nut.

2 Responses to Review: I Spy the Illuminati Eye by Sheila Keenan