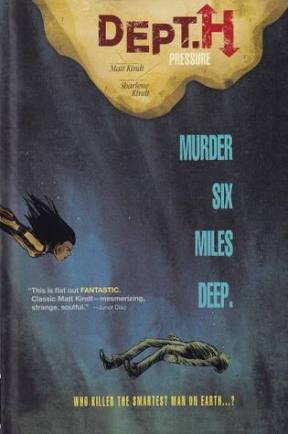 Mia is a special investigator hired to uncover possible sabotage taking place at a deep-sea research station. What she uncovers is a mind-blowing crime scene filled with suspects with terrible secrets, strange deep-sea creatures, and an impending flood!

Dept. H is at its core a closed room mystery, but Kindt adds in a wonderful sci-fi angle and has it placed in the bottom of the ocean where mystery and darkness reign.

I have been rather horrible at picking up graphic novels lately, especially those outside of the big three (Marvel, Image, and D.C.) and this book reminded me how much I love Dark Horse’s selection. Matt Kindt brings us a story that centers around the mysterious death of the main character, Mia’s, father. She has been sent to find out what happened, and why he was killed and by whom. We are introduced to a variety of personalities, all of whom seem to have motives and enough abrasiveness to warrant a side-eye or two.

The story is moody and atmospheric, with a little touch of the weird added in. I love that this story starts out as your basic closed room murder mystery, but as it progresses Kindt starts to include more of the ocean around them. It adds in a bit of creepiness to a story brimming with uncertainty.

I initially had issues with the artwork. I don’t typically enjoy things with sketchy lines or really anything outside of the range that can be considered ‘clean’, but as I moved forward I actually think the art worked well for the story. Especially the watercolors, which obviously add that watery element to the story but also really shines in the world where comics are typically supersaturated with colors.

Overall I think it’s a series to check out if you want a creepy little break from your normal reads. I’m looking forward to diving into the second volume and seeing where Kindt will take me.