Manga Review: The Voices of a Distant Star by Hoshi no Koe 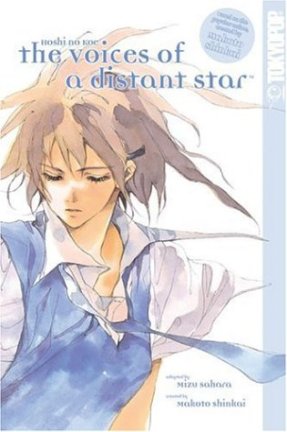 To what distance would you go for your one true love? In a future filled with a boundless potential for interstellar peace and prosperity, Mikako joins a research team to explore the recent contact between humans and alien races. She ventures out into space, leaving behind Noboru, the one young man she loves. As she travels deeper into this new frontier, her only connection with her boyfriend is through cell-phone text messages. But the years pass, and Mikako barely ages in the timelessness of space–while Noboru grows older and considers moving on with his life…In this timeless romance between star-crossed lovers in the most tragic of settings, there are some places man may not be ready to go.

I first came across this story in anime OVA format and was mostly lukewarm about it. The story had a lot of promise but it seemed to go by too quickly. When I saw this at my local library I didn’t have much hope it would be better but figured it’d be nice to give it a second try. I am happy to say I enjoyed the manga much more than the anime.

The anime seemed to lack something overall in terms of emotion, but I think the manga manages to capture the sense of sadness and at times desperation that the two characters feel as they move farther and farther from each other. It is still a short story but the ending feels a little more complete here, despite being open. I think what I loved about this story is that while aliens and space travel are a focus, the main focus is on the effect it is having on Mikako and Noboru’s relationship. As she moves farther away their messages take longer to be received, and they struggle with the effect that the time jumps have on each of them. We see Noboru grow older and struggle with the idea of holding on, and Mikako age slower (light speed jumps are involved) and she still maintains that strong connection to Noboru. It is only one volume and while that doesn’t offer a lot of time to connect with the characters on a truly personal level, I do think that anyone who has ever been separated from someone they love for a large length of time can certainly understand the internal conflicts and undefinable sadness that happens.

It’s a beautifully sad story that is well written and paired with fantastic art as well and is proof that sometimes it’s worth trying a story over a second time.

1 Response to Manga Review: The Voices of a Distant Star by Hoshi no Koe