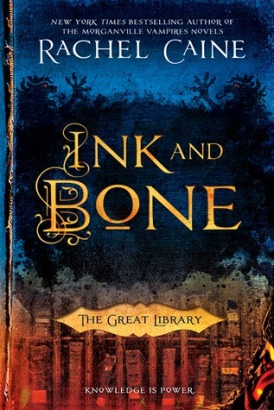 In an exhilarating new series, New York Times bestselling author Rachel Caine rewrites history, creating a dangerous world where the Great Library of Alexandria has survived the test of time…

Ruthless and supremely powerful, the Great Library is now a presence in every major city, governing the flow of knowledge to the masses. Alchemy allows the Library to deliver the content of the greatest works of history instantly—but the personal ownership of books is expressly forbidden.

Jess Brightwell believes in the value of the Library, but the majority of his knowledge comes from illegal books obtained by his family, who are involved in the thriving black market. Jess has been sent to be his family’s spy, but his loyalties are tested in the final months of his training to enter the Library’s service.

When his friend inadvertently commits heresy by creating a device that could change the world, Jess discovers that those who control the Great Library believe that knowledge is more valuable than any human life—and soon both heretics and books will burn…

A fantasy novel where the main focus is librarians in a world where the library runs the world? And that library is the Great Library of Alexandria? Moth meet flame. I admittedly paid little attention to this when it first came out. I have read some of Caine’s previous work and while I enjoyed it, I don’t think I was blown away by it. But when the publisher was kind enough to offer them to me I decided to check them out and see if it was something I would enjoy, and holy crap I should have paid attention sooner! I adore anything Alexandria related. It’s my historical sore spot…meaning, that yes I do get personally upset that it burned down despite it happening hundreds of years ago. I would love to see a world in which is survived, and this novel does just that but it is a doozy!

Jess Brightwell has spent his early life running books for the illegal book smuggling ring and avoiding the official libraries at all cost despite loving books in a way that is a detriment to his current life. So when he is set to go to Alexandria to try and become a librarian, he thinks he may have finally escaped the harsh reality of smuggling, burners, and ink lickers but things are far from what they seem in Alexandria. This book has such ominous tones to it! The first chapter shows right away the terrifying power of the Library and how that power can be indifferent to those around them. Knowledge comes first, and those that disrupt that knowledge or seek to spread it out of the Library’s control are enemy number one. It’s odd to think of the library as a place that can have negative impacts on the world, or as a place only interested in preserving & squirreling away knowledge, but that’s exactly how the Great Library is. It’s ruthless in its quest for all the knowledge the world has to offer, making book ownership illegal and knowledge highly controlled. Despite all of this I have to admit the Library has some incredibly cool aspects to it. I love that it has automatons and that they have their own alchemy based magic, bringing a bit more spice to an already rich world. The plot is one of a deliberate and slow-burn pace, which works in the story’s favor as it gives Caine plenty of time to develop the world around Jess.

Jess is such a great main character as well. He is a book lover at heart and a bit of jack of all trades, master of none type of character, but he’s incredibly clever. I do think that the side characters shine a little brighter than Jess though. Thomas is probably my favorite though, with his gentle giant kind of personality. I loved the odd way the Library chooses its librarians, and how it gives each character time to shine in an unexpected way. From being able to recite events of the past, to finding hidden caches of books and avoiding extremely dangerous traps.

I’m so happy I finally got around to checking this one out! I can’t wait to see how things develop after the ending of this one with Jess and the others, especially since things really ramped up towards the end in a few unexpected ways.

4 Responses to Review: Ink and Bone by Rachel Caine