Another week and more snow. I am so sick of the cold and these oddly placed snow days. We get fluff for a few hours and then it melts, turns to ice and causes chaos. I didn’t work on Wednesday because no one could leave their houses, and we went in really late on Thursday. Bring on summer. I’d rather melt to death than freeze. The kitten is doing well. He’s learning ‘no’ and ‘get down’, he also understands that not listening ends with him in time out. He’s still constantly trying to get away with stuff, but he doesn’t bite and claw nearly as much. He had a vet appt this week and is still too small for some of his shots.

Other than that my week has been a mix of good and bad, and a blur. I’m just ready for my veg out time today. 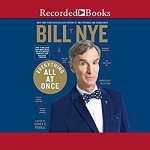 Everything All At Once by Bill Nye (Purchased)