Audiobook Review: Quest of the Dreamwalker by Stacy Bennett 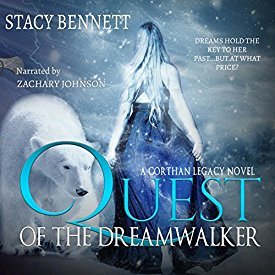 A perfect captive, Cara didn’t know her will had been stolen until she escapes with borrowed courage.

Cloistered in the Black Keep with only her father for company, Cara is an unwitting prisoner bound by chains of ignorance and lies rather than iron–until she meets a captured mercenary in her father’s dungeon. He kindles within her a spark of compassion she never knew she had and lends her an unfamiliar strength. But, the mercenary is slated to die, sacrificed to her father’s magic like all the others. Only this time, Cara can’t turn a blind eye. Unable to endure her father’s cruelty any longer, she vows to help the mercenary escape.

Now, as they flee to a world she’s only dreamed of, she finds defiance has a steep price. Her very existence endangers everyone she has come to care about. Who is she that her father refuses to let her go? To uncover the secret of her past, she must unravel the mystery of her dreams and claim the heritage of her own magical blood—before her father claims her as the last sacrifice.

Quest of the Dreamwalker is the incredibly strong start to the Corthan Legacy series!

Dreamwalker is a magical adventure that explores the need for freedom, self-discovery, and companionship. Cara is a young woman who has been caged her entire life, locked away by her father who uses his magic for evil means. It is here that she meets Khoury and Archer, and here that we get to see her learn what it means to make her own destiny. I love when a fantasy novel surprises me like this one did! I read fantasy all of the time, and it’s easy to see the same things over and over…and while I don’t really get bored of it (it is my favorite genre for a reason) it does get a bit too comfortable. Quest threw surprises at me left and right. Some of them plot related and others were tied to how I reacted to the characters. I found myself genuinely invested in Cara’s journey to find out who she was, and her growing relationships with the people she meets along the way. Her relationship with Khourey especially. They are two vastly different people who have been shaped by their views of the world. Khourey has been hardened by his past and all the battles he has fought, and Cara has been sheltered from the outside world but not from the horrors it can inflict. We see the two sides of how pain can mold a person, building either compassion or a reluctance for true trust.

I have to say the world building is a subtle work of brilliance. There are none of those lengthy info dumps filled to the brim with settings and histories, instead, we learn as we go along. Khourey’s section gives us some brief ‘normal’ glimpses of the world, but for the most part, we learn as Cara learns and I’m really thankful for that because this world is definitely one that shines when it’s peeled back slowly.

This is my second audiobook from narrator Zachery Johnson and I can honestly say he’s two for two so far. He is a genuine joy to listen to! His pacing is great and he has a wonderful selection of voices that really capture all of the emotions on the page.

Overall I think Quest of the Dreamwalker is one fantasy that I hope more people pick up! It’s has a little of everything going for it, action, romance, and some really stellar world building that doesn’t give everything away. It leaves off in such a great place as well…closing out one section of the journey and opening up a new one that has me chomping at the bit for the second book.

3 Responses to Audiobook Review: Quest of the Dreamwalker by Stacy Bennett