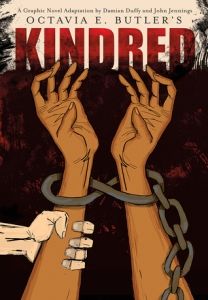 More than 35 years after its release, Kindred continues to draw in new readers with its deep exploration of the violence and loss of humanity caused by slavery in the United States, and its complex and lasting impact on the present day. Adapted by celebrated academics and comics artists Damian Duffy and John Jennings, this graphic novel powerfully renders Butler’s mysterious and moving story, which spans racial and gender divides in the antebellum South through the 20th century.

Butler’s most celebrated, critically acclaimed work tells the story of Dana, a young black woman who is suddenly and inexplicably transported from her home in 1970s California to the pre–Civil War South. As she time-travels between worlds, one in which she is a free woman and one where she is part of her own complicated familial history on a southern plantation, she becomes frighteningly entangled in the lives of Rufus, a conflicted white slaveholder and one of Dana’s own ancestors, and the many people who are enslaved by him.

I read Kindred a month or so before I was able to get this for review, so the story was quite fresh in my mind going into this and I have to say that it is a very faithful adaptation that I feel would be an excellent way to introduce more people to the work of Octavia Butler.

The story itself is one that is hard to handle but incredibly important and really brings a focus to the meaning of identity and as the title suggests the meaning of kindred. It really shows the difference between self identity and public identity (that which other people assign to you), as well as what it means to be family with someone through experiences vs through blood. It’s a novel full of hard choices.

The only fault I truly had with this adaptation was the art style. I’m super picky on art, which just one of those biases that I’ve had for a long time (I avoided a good number of excellent cartoons as a kid because I hated how something was shaded, go figure). I liked the use of the colors in the various parts of the story, and how Dana’s present day life was executed in grey tones while her ventures into the past were given full color. While I’m not fond of the more sketchy outlining I do think it evokes raw emotion more readily then something that is really polished looking. In fact I appreciated that it wasn’t super polished, because this story is mess and painful and the art really gets that through.

I do still really recommend grabbing a copy of the actual novel, but this graphic novel adaptation is an excellent introduction to Butler.

Leave a Reply to La La in the Library Cancel reply