Posted on December 2, 2016 by Michelle @ In Libris Veritas 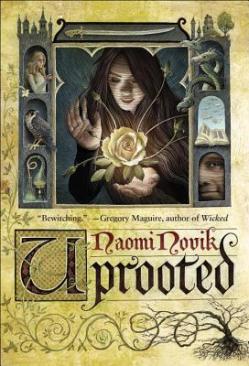 “Our Dragon doesn’t eat the girls he takes, no matter what stories they tell outside our valley. We hear them sometimes, from travelers passing through. They talk as though we were doing human sacrifice, and he were a real dragon. Of course that’s not true: he may be a wizard and immortal, but he’s still a man, and our fathers would band together and kill him if he wanted to eat one of us every ten years. He protects us against the Wood, and we’re grateful, but not that grateful.”

Agnieszka loves her valley home, her quiet village, the forests and the bright shining river. But the corrupted Wood stands on the border, full of malevolent power, and its shadow lies over her life.

Her people rely on the cold, driven wizard known only as the Dragon to keep its powers at bay. But he demands a terrible price for his help: one young woman handed over to serve him for ten years, a fate almost as terrible as falling to the Wood.

The next choosing is fast approaching, and Agnieszka is afraid. She knows—everyone knows—that the Dragon will take Kasia: beautiful, graceful, brave Kasia, all the things Agnieszka isn’t, and her dearest friend in the world. And there is no way to save her.

But Agnieszka fears the wrong things. For when the Dragon comes, it is not Kasia he will choose.

Uprooted has been one I actively avoided since it came out, because the hype was very big and I just sort of wanted it to die down a bit before I tried reading it. I didn’t want a bunch of random reviews praising it rattling around in my head while I was trying to form own opinions. I’m glad I did because I went into this one fresh and curious, and it was so good!

Uprooted is a mix of fairy tale and epic fantasy that had a real dream like quality to it. It is a stand alone novel, but it has a rather complex magic system and some very rich world building. I love the way this is written especially! It has a real fairy tale feel to it and despite all the details it feels “light” and has a really dark whimsical quality to it. I’m actually quite curious to see how the audiobook is because I think listening to it would be really awesome! It does move a little slowly in parts as it takes time to flesh out some of the story and characters, but I think all the character interaction is worth it.

Agnieszka is a messy and strong willed girl who is forced into servitude to the Dragon. I freaking loved their beginning, and how utterly frustrated he is with her uselessness in the kitchen and with organization. I wasn’t expecting the connection between them, and surprisingly I quite liked it. Where he is meticulous and rigid in his methods, she is more free flowing and intuition based and it provides a good balance not to mention a lot of great little moments between them. Agnieszka and Dragon are amazing characters to follow, and I love them both for their differences.I love that Agnieszka doesn’t play by the rules with magic, and thrives in the situational chaos that comes with improvisation.

Uprooted turned out to be quite the treat! I definitely recommend it for those who love fantasy, especially those not looking to add another series to the mix.

This entry was posted in Book Reviews (2016) and tagged 4 stars, fantasy, review. Bookmark the permalink.