Posted on September 15, 2016 by Michelle @ In Libris Veritas 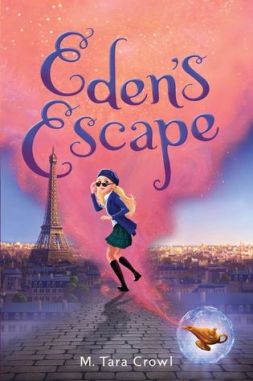 Eden’s new life on earth begins in New York City under the guidance of her new guardian: Pepper, a petite, bubbly genie alum who’s also a Broadway actress. Before she has a chance to settle in, though, Eden is whisked away for a granting–only to find herself trapped in a laboratory. David Brightly, owner of the world’s leading tech company, cares more about tapping into the lamp’s power than making a wish and starts performing tests on Eden. With Brightly’s plasma shield around the lamp, Eden has no way home. Left without a choice, she escapes the lab and goes on the run. After her daring exit, Eden finds herself on the streets of Paris–home to Electra’s headquarters. Left in a strange city with a price on her head (courtesy of scheming Brightly), Eden has to keep her wits about her. She dons a chic disguise and flits around Paris incognito, investigating Brightly Tech. Assisted by Pepper and her old adversary Bola, as well as some new friends, Eden embarks on a quest to retrieve the lamp and protect the secrets of the genie legacy.

Eden’s Escape jumps right back into the story with Eden getting her own wish to live outside the lamp. She now lives with Pepper, a genie alum, who becomes a fast friend…but she doesn’t count on a wish calling her away and going horribly wrong.

So this one picks up right when the first book ends and we are treated to some wonderful moments of Eden getting to explore New York City with her new guardian Pepper. I love how she drinks up the world around her, and the fact that she now has a fellow genie who enjoys the same just makes it all the better. Unfortunately it doesn’t stay peaceful as she’s pulled into a wish that goes terribly wrong and Eden finds herself the target of Electra once again and a new more tech based enemy. Brightly, is a cool addition to this one and I really liked the rather sinister feel of their introduction; and of course Sylvana and her organization make a reappearance and we get to see even more about them. I love the explorations of what it means to have independence, especially as someone still under the care of another, as well as the fact that even adults can get things wrong or over react out of fear and love.

Eden has matured some since Eden’s Wish, but she still has a ways to go and we see her get to stretch her wings a little bit more here. That lively and bubbly personality that made me love her is still there, and I just love that even when she’s on the run she still takes the time to look at the world around her. Pepper is the perfect match for her and I loved their relationship, and their natural bond. They both have such vibrancy and they just sort of light up the page with their love of life. Eden’s relationship with Bola is explored more as well, and after the rather tense ordeal in book one it’s nice to see them interact again. Their personalities are vastly different and so it’s nice to see them clash as they struggle to find common footing.

Eden’s Escape is a quickly paced (I read it in one day) novel, that’s packed with just as much conflict and character exploration as the first book! I think Tara Crowl really created a winner of series here, and I can’t wait to recommend this one to a few readers that I know would enjoy it.

Tara Crowl grew up in Murfreesboro, Tennessee. She studied Cinematic Arts at the University of Southern California, then received an MA in Creative Writing at Macquarie University in Sydney, Australia. She lives in New York City.