Review: Of Sand and Storm by Amber Argyle 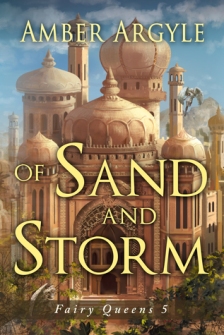 By law, any child born in Idara is free, even if that child is born in a slave brothel. But as Cinder grows into a beauty that surpasses even that of her mother and grandmother, she realizes that freedom is only a word. There are other words too, stronger words. Words like betrayal and prison and death. And there are words even stronger than those. Words like courage and family and love.

In the end, if Cinder is to escape the fate of her matriarchs, she’ll have to fight for her freedom. Because true freedom is never free.

Of Sand and Storm is a side story within the Fairy Queen series that focuses on a young woman named Cinder, who plays a small role in Winter’s Heir. This is her story of how sh came to be entangled in the world of the Fairy.

Cinder’s story touches on subjects that were briefly highlighted in the other novels, such as sex trafficking and slavery. Where we got an overview of sorts of the situation in Idara in Summer Queen and Of Fire and Ash, we now get to see just what slavery can mean for those unfortunate enough to forced into it. We see women forced to work in brothels, and underhanded tactics to turn free people into slaves through rising debt and indentured servitude. It’s a harsh world, and gaining freedom comes an a very high price. This one isn’t an easy read and it’s definitely not a light one, as it deals with subject matter that is on the darker side but they are topics so often glossed over in younger fantasy and while this novel never ventures into anything truly graphic the overall tone is there. As such I definitely think this would be better for the older young adults, though I would say the same for most of this series already. Fighting for survival and the right to choices are themes in all of the Fairy Queen novels, but never has it felt more real than in Of Sand and Storm.

Cinder isn’t a woman fighting to prevent a war or save a nation, she’s fighting for her freedom and the freedom of her family. She’s fighting against an institution that sees her as a way to make money and would keep her in bondage until she dies. Her struggle is on a smaller scale than some of the others in this series but in a lot of ways her fight is just as important. Her story shines a light on the darker recesses of the world that the Fairy Queens fight over, where as the the otherworldly creatures fight over who owns the lands there are people struggling to gain the simple freedoms of choice. Cinder is a silent sort of strong and would do anything for her family, and while she has a very grounded sort of quality about her she also has a small spark of fire that refuses to be quashed out. I love the fact that she holds onto a goodness that so many would have lost after going through what she has, and we see that in other characters featured. We get to see the toll servitude takes on the minds of those forced into it, and how it can harbor bitterness and resentment. Like most of the women Argyle writes she is a woman who knows when to bend and how to weather storms, even when she doesn’t see it in herself. She is strong willed and independent, but willing to take help that is offered or place herself on the line to get to where she wants to be.

I’m so glad o have this one last little foray into Argyle’s Fairy Queens world, dark though it may be, because she has a way with words. I have read more than half of Argyle’s work and she has yet to fail to deliver a story worth reading, and I sincerely can’t wait to delve into even more.

1 Response to Review: Of Sand and Storm by Amber Argyle