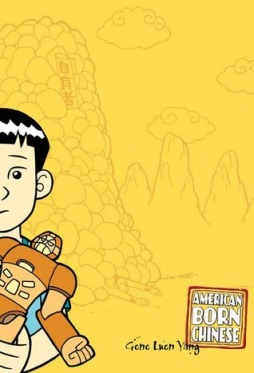 All Jin Wang wants is to fit in. When his family moves to a new neighborhood, he suddenly finds that he’s the only Chinese American student at his school. Jocks and bullies pick on him constantly, and he has hardly any friends. Then, to make matters worse, he falls in love with an all-American girl…

Born to rule over all the monkeys in the world, the story of the Monkey King is one of the oldest and greatest Chinese fables. Adored by his subjects, master of the arts of kung-fu, he is the most powerful monkey on earth. But the Monkey King doesn’t want to be a monkey. He wants to be hailed as a god…

Chin-Kee is the ultimate negative Chinese stereotype, and he’s ruining his cousin Danny’s life. Danny’s a popular kid at school, but every year Chin-Kee comes to visit, and every year Danny has to transfer to a new school to escape the shame. This year, though, things quickly go from bad to worse…

These three apparently unrelated tales come together with an unexpected twist, in a modern fable that is hilarious, poignant and action-packed. American Born Chinese is an amazing rise, all the way up to the astonishing climax–and confirms what a growing number of readers already know: Gene Yang is a major talent.

Gene Luen Yang is one of my all time favorite comic book writers. He brings a sort of ease of to the genre despite his rather unique way of weaving complex stories.

American Born Chinese presents us with three different stories. The main story centers around a boy named Jin Wang, who is the only Chinese American in his school and finds himself increasingly embarrassed because of it. The second deals with the tale of the Monkey King, who works hard to rise about his station but in the face of opposition for his being a monkey decided to try and erase that from who he is. And lastly is the sitcom like story of Chin-Kee, a very stereotypical Chinese boy who comes to visit his cousin Danny and embarrasses him horribly. All three of the stories connect in a very interesting way, but separately they all focus on the issues involving race and self identification. Each character (Jin, the Monkey King, and Danny) all  deal with race/culture shame. When they are faced with racism or embarrassment over the differences in their lives they all find a way to try and move away from what they feel is the problem, the culture itself.

Gene Luen Yang manages to present a rather simple story with a complex message in a really uniqiue way, pulling together all three of these stories into one. One of my favorite things about his work is that though the message itself leans towards their heavier side, he always finds away to include humor and just a touch of fantasy. His artwork is simply but expressive and works really well with the story he’s telling.

To me this is yet another success from him and it further cements why I love him as an author. American Born Chinese is a great read for both kids and adults, even if you’ve never picked up a graphic novel before.