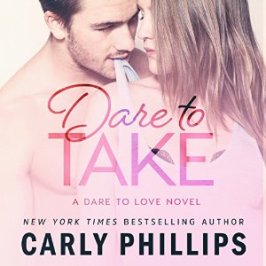 She was off limits…But he couldn’t resist.

There are just some guys you don’t touch – even someone as innocent and inexperienced as Ella Shaw knows that. But when her brother’s best friend is up for grabs and willing, she can’t resist. After all, she’s wanted him for years.

On leave from the army, Tyler Dare is just looking for a little fun, but his best friend’s sister is off limits. Yet, unable to deny how sexy and alluring she is, he finds it all too easy to succumb to a night of passion and heat that ends the next morning in the worst way possible.

Now, Ella is stranded on a tropical island with a hurricane bearing down, and only Tyler can save her. It’s his chance to make amends for the past and show the woman he’s never forgotten that he’s coming after her, in more ways than one.

Carly Phillips is a name I’ve seen around for a while now, and it wasn’t until recently that I started getting really curious about her work. She’s pretty prolific and I had issues trying to decide where to start, so maybe it was a bit of fate intervening when the Audavoxx request came through. Dare to Take is book six in the Dare to Love series, HOWEVER it can be read as a standalone and doesn’t relay on knowledge of the previous books. There is a small spoiler fact for the previous novels, but I’d go so far as to say it only made me want to read them more.

Our story focuses on Ella Shaw and Tyler Dare, who had a rather humiliating and painful experience together years ago and have spent much of their time trying to avoid each other..though for different reasons. Both are caring, independent, and a little distant thanks to bad experiences in their pasts and the way these two just clicked made the chemistry between them undeniable, and I’m really pleased with the way their relationship progressed. So often when the main characters are faced with issues and problems, the issues are pushed aside or magically cured by a quick rendezvous between the sheets…and I was so terrified that it was going to go that route, but it really doesn’t. Ella and Tyler have a lot of growing to do on their own, and they both take the time to do that without the other around. It’s just as much about their individual journeys as it is about their journey together. And let’s not forget the amazing  unit that is the Dare family. I really love romance novels where there is a large, loving, and close family involved…where there is no pressure to be anyone other than you, and add in a great support network for both main characters to relay on. We even have a taste of romantic suspense added in, and even though I figured it out kind of quickly it was a nice little touch.

The narration by Sophie Eastlake is phenomenal! She manages to capture that easy going feeling of the novel without ever loosing the emotion that really makes this story pop.She does some pretty solid voice work, especially when it comes to the Dare brothers. I’ve already added her to my list of narrators to keep an eye out for, and I’m pleased to see she handles all the Dare books.

If you’re looking for a book to read in your downtime while curled up under a blanket or enjoying the sunshine outside, then Dare to Take is guaranteed to put a smile on your face. It’s a heartfelt romance with plenty of character growth and steam, and despite being book six in the series it does a great job of being accessible.