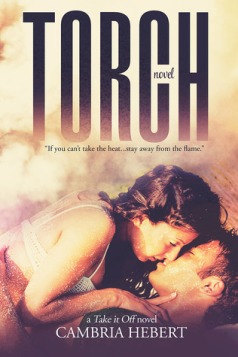 If you can’t take the heat… stay away from the flame.

Katie Parks has been on her own since the age of fifteen. All she’s ever wanted is a place to call her own—a life that is wholly hers that no one can take away. She thought she finally had it, but with the strike of a single match, everything she worked so hard for is reduced to a pile of smoking ash. And she almost is too.

Now she’s being stalked by someone who’s decided it’s her time to die. The only thing standing in the path of her blazing death is sexy firefighter Holt Arkain.

Katie’s body might be safe with Holt… but her heart is another story.

As the danger heats up, sparks fly and the only thing Katie knows for sure is that her whole life is about to go up in flames.

Torch caught my eye while it was on sale because I’ve heard so many people exclaim love for both it and Cambria Hebert, so I took a chance…and while it only took me a day to read, I sort of wish I had invested my time elsewhere.

Torch isn’t horribly written, but I found that the style of writing and the execution of the plot made the overall story rather…well, bland. It was all very basic. There is a significant lack of depth when it comes to the characters and the situations they find themselves in, conversations feel stilted and everyone takes on that Mary Sue quality. In fact we don’t get to know the past of the main character, Katie, or Holt her love interest for well over half of the book…which to me is unacceptable. If this had been a straight forward thriller or mystery, I don’t think I would have minded but the whole thing about romance novels is that connection and spark you get from the characters…and that is missing from this. All of the conversations are very basic and straight forward, and the result is that Katie comes off as a bit…simple. The suspense part of this story is decent enough, though I think the lack of a connection to the characters really worked to nullify most of the tension.

Katie, falls into severe troupe territory and not in a good way. She’s another NA character who is virginal and utterly innocent in the ways of relationships…which would  be fine, but without that added oompf to let me know just who she is it makes her into this blank slate. Holt also falls into that weird generic hot pure soul, who is utterly talented in bed and has a job from the NA drop down menu. I don’t want anyone to think I hate these troupes in general, because I don’t. I’ve read others like this, that I really enjoyed but it all comes back to that one thing I’ve been saying this entire review…depth. I need back tory, i need actual emotion other than panic and lust, I need to see those moments they spent talking about bad tv and cooking together…because if you just tell me they happened, I’m still left with nothing.

I do own book two in this series, Tease…and I’m sort of hesitant to read it now. I did pay for it, so I feel I need to otherwise that’s money wasted…but I just don’t know if this author is a good fit for me anymore.