Audiobook Review: Threats of Sky and Sea by Jennifer Ellision 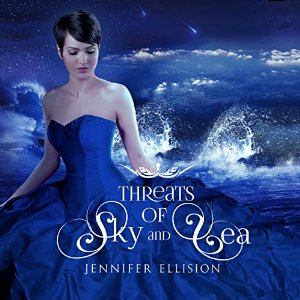 Sixteen year-old Breena Perdit has spent her life as a barmaid, innocent to her father’s past and happily free from the Elemental gifts that would condemn her to a life in the Egrian King’s army. Until the day that three Elemental soldiers recognize her father as a traitor to the throne and Bree’s father is thrown in jail—along with the secrets from his last mission as the King’s assassin. Secrets that could help the King win a war. Secrets he refuses to share.

Desperate to escape before the King’s capricious whims prove her and her father’s downfall, Bree bargains with him: information for their lives. It’s a good trade. And she has faith she’ll get them both out of the King’s grasp with time.

But that was before the discovery that she’s the weapon the King’s been waiting for in his war.

Now, time is running out. To save her father’s life and understand her own, Bree must unravel the knot of her father’s past before the King takes his life– and uses her to bring a nation to its knees.

Threats of Sky and Sea is the first book of a YA fantasy series that really hits the ground running. We’re treated to a fantastic new world, with a ton of great characters and even cooler abilities.

I’ve had a lot of trouble getting into books lately, regardless if it be an actual book or an audio, it’s not the books’ fault but they are usually the ones that suffer because of it. Sitting half-finished collecting dust both virtual and real. Threats of Sky and Sea had no such issues. It immediately drew me in with it’s clean and crisp style, and I legitimately enjoyed the slow build that Ellision used to grow her world. It’s a world with tenuous alliances, a king with a mind for power, and abilities that align with the elements. One thing that always gets point from me is the use of elemental abilities, there is just some innately cool about having a person being able to control fire or suck the air out of a room with a wave of their hand.

Our main character is Breena, a fiercely independent young woman who is forced into the high society of her kingdom…mostly against her will. She’s strong, loyal, and doesn’t willingly allow anyone to trample on her. For me, a character like Breena is very easy to like and understand, and I think I definitely needed another series with a character who reminds me a bit of myself. And the host of side characters, like Caden and her father, and their interactions are just as wonderful.   There is a touch of romance, but it’s nice and light and it doesn’t become a focal point that distracts from the political and familial problems Breena has to face.

Misty Daughtery does a lovely job of narrating of the title. She has a distinctive voice, and really gives some unique life to the characters, but Bree is definitely my favorite. She has a light tone overall, but adds in that little touch of attitude that is just perfect.

Overall, I am more than pleased with Threats of Sky and Sea.  It’s the perfect light fantasy, and I can’t wait to continue onto book two!