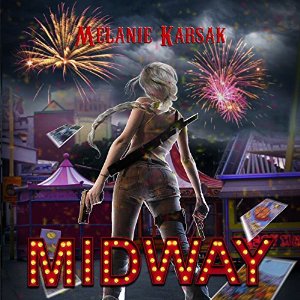 Step right up, ladies and gentlemen, for the beginning of the end.

Carnie. Ride jockey. Roustabout. White trash. Tilt girl. Gypsy. Cricket has been called a lot of things, but she never thought survivor of the zombie apocalypse would be one of them. One day she’s barking on the midway, and the next day, the world is eating itself alive.

Cricket, along with Vella, a tarot reader, and Puck, Cricket’s mangy mutt, find themselves running for their lives, but where can you hide when mankind has fallen? Cricket will need help if she hopes to survive.

Luckily for her, we were never really alone, and apparently, magical forces want to keep this tilt girl alive.

Midway is the first novella in the Harvesting series and comes directly after the first book, but focuses on a new character named Cricket. A carnie, owner of a Tilt-a-whirl, and now  a new citizen of a world quickly going to hell.

The story picks up right before the beginning of the end and we get a chance to see some of the mayhem as everything starts going downhill. I really like getting to see the cause of the apocalypse close up, which is something we didn’t really get in The Harvesting, so I was happy to see it here and I think I’m actually grateful I got to see it through Cricket’s eyes. She has a very unique flair about her that makes her a joy to read about (or in this case hear about) right from the opening line, and it was interesting to see how someone with so much pep and enthusiasm would handle something so dire. But for all her cheer she has steel in her spine, and Cricket makes for one hell of a main character.

The story moves fairly quickly, the audiobook doesn’t even hit 3 hours, but it feels like complete lead up to the second full novel. None of the character development feels rushed and we still get the wonderful enveloping world building we were treated to in The Harvesting.

I initially had no idea this was the same narrator as the first book, as I sort of glance at the info briefly before letting myself be swept away. Kirsten James managed to completely cloak her voice in a southern accent, and as someone who has grown use to picking up on voice actors even through accents I am impressed. This girl has talent!

I am so stoked to start book two! I need to know how Cricket meets up with Layla’s group and just how Circket will handle finding out that zombies are not their only problems. This is becoming a series I NEED others to read so they understand how awesome it is.