Posted on February 8, 2016 by Michelle @ In Libris Veritas 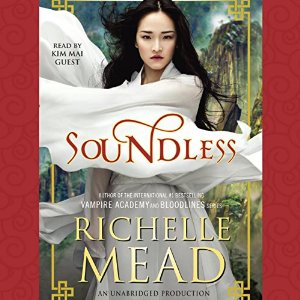 For as long as Fei can remember, there has been no sound in her village, where rocky terrain and frequent avalanches prevent residents from self-sustaining. Fei and her people are at the mercy of a zipline that carries food up the treacherous cliffs from Beiguo, a mysterious faraway kingdom.

When villagers begin to lose their sight, deliveries from the zipline shrink, and many go hungry. Fei’s home, the people she loves, and her entire existence are plunged into crisis, under threat of darkness and starvation.

But soon Fei is awoken in the night by a searing noise, and sound becomes her weapon.

Richelle Mead takes listeners on a triumphant journey from the peak of Fei’s jagged mountain village to the valley of Beiguo, where a startling truth and an unlikely romance will change her life forever….

Soundless is a light fantasy novel, with a rather quick story but written in a way that provides a richness to the mere 250+ pages.

Soundless will be (is) without any doubt a book that either works for you or doesn’t. It’s not that it has a polarizing topic or quirky character, it’s simply…simple. Personally I didn’t mind the simplistic nature of the story, for two reasons. One is Richelle Mead’s writing, which is fantastic. She puts so much life and detail in a few words that it really brought the mountain side village to life. And the second was the narrator, Kim Guest, whose voice really fit the story. She has a light airy voice, but it’s strong and she has a great grasp of each character she’s portraying. I think if I had been reading it the rating would have more around the 3 star range, but having Kim really push the emotions at the right times made it even more enjoyable.

I really liked Fei and those in her village, all of whom are deaf and communicate through sign language and rich paintings.  I will say that while I think Fei is great and has a kind heart, I didn’t really ‘know’ her or any of the other characters. So I think that aspect Soundless sort of fell short, and focuses mostly on story driven descriptions.

The fantasy element in this one is very slight, and really only comes up on occasion so it’s easy to forget you’re reading a fantasy novel. I actually liked how light it was. I read fantsay novels that are loaded with tons of new ideas, names, and races…and sometimes it’s nice to kick back and read a story that is easy to grasp and ties up nicely at the end. Not everything needs to be Game of Thrones, right?

Overall it was a really enjoyable one that served as a much need palette cleanser. I think Richelle Meads excellent writing style and Kim Guest’s beautiful voice it makes for one delightful listen, and I’ll be on the lookout for more from both of them.