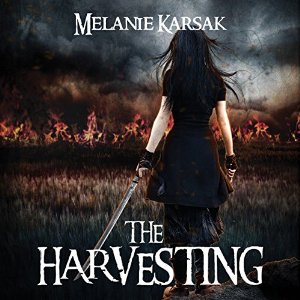 While Layla Petrovich returns home to rural Hamletville after a desperate call from her psychic grandmother, she never could have anticipated the horror of what Grandma Petrovich has foreseen. The residents of Hamletville will need Layla’s cool head, fast blade and itchy trigger finger to survive the undead apocalypse that’s upon them. But even that may not be enough. With mankind silenced, it soon becomes apparent that we were never alone. As the beings living on the fringe seek power, Layla must find a way to protect the ones she loves or all humanity may be lost.

It’s all fun and games until someone ends up undead!

The Harvesting is my second foray into the world of Karsak, and I have to say I kind of like it here. The Harvesting is a paranormal horror novel with a nice mix of romance, lore, and badassery.

Layla Petrovich finally returns home to Hamletville after her grandmother calls her and basically demands it. After a few chapters of set up (and the awesome Grandma Petrovich), we are off on an adventure that no one is prepared for. I love a good paranormal book that doesn’t pull it’s punches but isn’t in too much of a rush that it forgets to add some depth and dimension. I was a bit worried at first with the pacing during the first portion, but I LOVED the direction it went. It took the time to show the people of Hamletville come together as a community to survive against the undead, and again as their world is shaken again. We get an awesome blend of the dark and scary creatures that have taken over the world, and thanks to the new sight given to Layla she can also see the kinder spirits that inhabit the world around her.

Layla is definitely going on my favorite characters list for the year. She’s tough, knows her weapons and leads by nature but she is still human. She cares for people and is capable of offering comfort, and needing it. My other favorite was Grandma Petrovich, she was only in a small portion of the book but she is definitely amazing and she pretty much makes my favorite scene (target practice) towards the beginning. The woman is a total badass, and it’s clear where Layla gets it from. The romance itself is a slow building and satisfying one, with plenty of ups and downs as they struggle to find some normalcy in the situations around them and deal with past relationships.

This is the second audiobook I’ve listened to that was narrated by Kristin James and I really love the way she reads. She really manages to capture all the emotions from the characters, and does some pretty wicked accents as well. It takes some real talent to make listening to a story more fun than reading it, and I think I’ll probably continue this series in audio format.

Overall I am incredibly excited to see where the rest of this series goes and Melanie James is certainly one of the authors I’ll be keeping a close eye on. If you enjoy paranormal romance or lighter horror then it’s certainly a book to check out, and I think worth the splurge for the audio if you can.