Posted on September 17, 2015 by Michelle @ In Libris Veritas

Surprised by a Game!

Is there a video game that surprised you when you played it, whether in a good or bad way?

Bioshock Infinite was both a good and bad shock, if that makes sense. When I started playing I was basically running around the starting portion of Columbia completely loving the way it looked. I had a bit of shock with the forced baptism, but I was willing to let that slide…I was digging the colonial feel, with the awesome statues and how quaint everything was…and the BOOM, racism. Not even the kind where you’re like, “woah what a dick” it jumped right into the “we’re really happy we’re racists and we take it to the extreme”. That first scene with the baseball (if you’ve played, then you know) had me sitting there with my mouth open. That being said the dark nature of this beautiful place actually made the game that much better, and it also made destroying everything that much more fun. 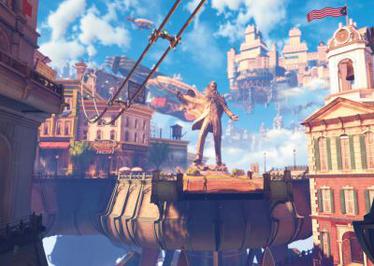 Mass Effect 2 was a good shock. I’ve played plenty of games where I loved the characters, but this was one of the first ones where I basically became obsessed with characters. The dialogue style wasn’t new to me (Old Republic and Jade Empire came before) but the depth had me. I even downloaded the app, which let you received personal ’emails’ from the characters as you progressed through the game. The feels were off the charts.

Two Brothers was an amazing shock. My boyfriend downloaded this one and had me play it with him. By “with him” I mean he took one side of the controller and I took the other, so I controlled the little brother and he controlled the older one. Let me tell you the game basically ripped me a part towards the end and I think the shared experience with him actually made me feel it even more. I actually started tearing up at one point, and I’m not a crier.

I’m actually playing two games right now, though one is a super low stress and not all that involved game.

I’m obsessed with this game right now. I can’t even tell you how many hours I’ve put in since I picked it back up 2 weeks ago…okay I do know, but I’m going to admit to it. I’m almost done though, so I’m thinking after I finish all my current side quests and war table missions I’m going to grab two of the DLC and play those before I head to the big bad. The screenshot is of my character, Dany (I made her look like Daenarys from Game of Thrones, purples eyes included) on her mighty Hart, who makes the best noise when you make him run. He sounds like a dying train.

Viridi is a game meant to help you unwind a bit and it’s literally just growing succulents in a pot. That’s it. Occasionally you’ll have to water them, but you’ll also have to pull weeds and you can even sing to them to help them grow better. I’ve had it for about 2 weeks and nothing has died, so I’m counting that as a win.

5 Responses to Read Play Blog: Surprised by a Game