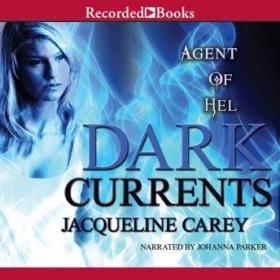 The Midwestern resort town of Pemkowet boasts a diverse population: eccentric locals, wealthy summer people, and tourists by the busload; not to mention fairies, sprites, vampires, naiads, ogres and a whole host of eldritch folk, presided over by Hel, a reclusive Norse goddess.

To Daisy Johanssen, fathered by an incubus and raised by a single mother, it’s home. And as Hel’s enforcer and the designated liaison to the Pemkowet Police Department, it’s up to her to ensure relations between the mundane and eldritch communities run smoothly.

But when a young man from a nearby college drowns—and signs point to eldritch involvement—the town’s booming paranormal tourism trade is at stake. Teamed up with her childhood crush, Officer Cody Fairfax, a sexy werewolf on the down-low, Daisy must solve the crime—and keep a tight rein on the darker side of her nature. For if she’s ever tempted to invoke her demonic birthright, it could accidentally unleash nothing less than Armageddon.

Dark Currents is the first book newer urban fantasy series, with the third book just releasing last year (2014). I originally started this because I won the third book in audiobook format and wanted to see if it was something I might like, or simply pass on and give to someone else. I’m happy to say I’m really excited to see where the series goes.

The small town of Pemkowet is a tourist hotspot because of it’s tiny atmosphere and it’s wide variety of otherworldly creatures, and it’s the perfect setting for this paranormal mystery. The whole idea of having a town known for it’s supernatural occurrences where you might see a Naiad in the river or a Ghoul walking down the street is just a ton of fun and lends a sort of light hearted attitude to the story. In some ways it reminds me of what Anita Blake and Sookie Stackhouse use to be, and I can only hope it continues this way. The story of Daisy and her involvement in solving the mystery of a dead college boy takes the forefront, and her attraction to some of her counterparts is on the side…but still yummy enough that you want to see more of them. The mystery itself is intriguing

Daisy Johanson is a conundrum of a person. She’s half human, half demon and spends much of her time toeing the edge of her emotional boundaries. However despite her rather…odd heritage and penchant for ramped up emotions, I think Daisy is an incredibly great person and a fun main character. She’s a bit sarcastic and can get downright feisty when needed, but overall she’s quite good at playing the hero and is super careful to never tread too deeply into the Seven Deadly Sins territory. Not to mention she has a very cool job as the Hel’s Enforcer, and that means she has to come face to face with all manner of creatures and dole out justice. Cody is her werewolf cop partner, and her long standing crush…which is thankfully out on the table pretty quickly, and we’re not stuck drowning in the constant tiptoeing around the topic. In fact all of the relationships are fairly open in this one, and if there is attraction present they don’t twiddle their thumbs and wait for a near death experience to confess it. And while Cody is the main focus of her attention for half of the book I felt myself being more drawn to Stefan, the motorcycle club Ghoul. He sounds like he would be gruff and full of attitude, but he’s actually quite suave and old world gentlemen. And to make things better while there is some jealousy present, it doesn’t become so blinding that we getting territory marking. Daisy is very much her own woman, and she doesn’t allow for other people to dictate who she spends her time with.

While Johanna Parker might not be my favorite narrator she definitely added a lot of personality to the mix and really brought out the character’s emotions. It’s rare that I actually enjoy listening to an audio at normal speed, which I have to do at times, but this one made the entire thing really fun and enjoyable.

Dark Currents is the perfect starting place for a great urban fantasy series, with plenty of mystery, action and swoon to keep me interested and happy.