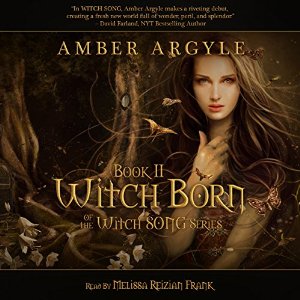 Brusenna thought it was finished. She defeated the Dark Witch, saving the Haven Witches from imprisonment and death. She found love and a place to belong. She was wrong. Haven is not the sanctuary it appears to be. Even love is in danger of slipping away like water through cupped hands. Some things can’t be saved. A new threat merges with the old as the Witches’ dark history begins to catch up with them. Only Brusenna knows the extent of the danger and how to stop it, though doing so might cost her everything. Including her life. Will Brusenna be required to make the ultimate sacrifice?

Witch Born is book two in the Witch Song series, and the last one centered around Brusenna. Senna has defeated the Dark Witch and saved Haven, but something else is beginning and she’s becoming more powerful as time goes on. It was a real treat to be able to finally get back into the world of Witches and elements, and in a different format!

There may be spoilers for book one below this!

I was a bit worried that I wouldn’t remember all that happened in the first book since it’s been awhile, but I found it easy to slip back into the world Argyle has created. Senna is having trouble moving past the devastation they have wrought on the country of Tarten, and wants to put the world to rights. However she finds herself in the middle of another battle, one that the Witches of Haven thought long over. Witch Born is a book centered around coming into one’s own, and putting aside differences. Senna is not thriving the way she had hoped in the tutelage of Haven, instead she feels stifled and isolated. Many of the witches do not trust her, others simply don’t like her, and a few wish to keep her cooped up and out of harm. But Senna longs to fix Tarten, and in trying to do so she finds herself brimming with new power and finding a veiled threat. I really loved getting to learn more about the Witches lore, and getting more explanations of how the four elements play into the structure of the world. There is a ton of action, vivid magic, and a lot of twists & turns as Senna tries to discover the unseen threats origin and fix Taren. As short as this novel is I still found it to be rich in descriptions, and I could easily picture the dusty lands of Tarten, the tall ancient trees of Haven, and the dangerous swells of the ocean.

I love strong female characters and that is one of Argyle’s strongest points in her writing. The witches in this book are fierce and independent, and for the most part live apart from men and outsiders. Senna’s journey in this book is just as much about finding her own independent strength as it is about finding her power. Her relationship with Joshen is still sweet, and a great addition to the story but I really appreciated that Argyle took the time to force Senna to find herself without Joshen and to find that she can stand strong on her own.

While I will admit that our narrator, Melissa Reizian Frank, is not among my favorites I did enjoy her rendition of the tale. I’m notorious for being ansty with audiobooks since I read much faster than they can, and I did feel a bit of that with this one as Melissa’s pace is a slower one. However I did enjoy her accents for each of the regions, and thought she gave the witches voices of their own.

I’m a bit sad to see the end of Senna’s journey, and what an end it was, but I’m glad I got to enjoy yet another one of Amber Argyle’s rich tales.