Audiobook Review: The Ocean at the End of the Lane by Neil Gaiman 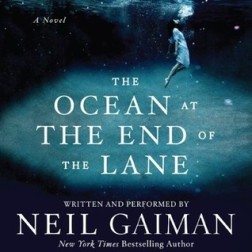 Sussex, England. A middle-aged man returns to his childhood home to attend a funeral. Although the house he lived in is long gone, he is drawn to the farm at the end of the road, where, when he was seven, he encountered a most remarkable girl, Lettie Hempstock, and her mother and grandmother. He hasn’t thought of Lettie in decades, and yet as he sits by the pond (a pond that she’d claimed was an ocean) behind the ramshackle old farmhouse, the unremembered past comes flooding back. And it is a past too strange, too frightening, too dangerous to have happened to anyone, let alone a small boy.

Forty years earlier, a man committed suicide in a stolen car at this farm at the end of the road. Like a fuse on a firework, his death lit a touchpaper and resonated in unimaginable ways. The darkness was unleashed, something scary and thoroughly incomprehensible to a little boy. And Lettie—magical, comforting, wise beyond her years—promised to protect him, no matter what.

A groundbreaking work from a master, The Ocean at the End of the Lane is told with a rare understanding of all that makes us human, and shows the power of stories to reveal and shelter us from the darkness inside and out. It is a stirring, terrifying, and elegiac fable as delicate as a butterfly’s wing and as menacing as a knife in the dark

This is my second Neil Gaiman novel, and my first audiobook by him…and yes he actually reads it himself!

The Ocean at the End of the Lane takes on a very contemporary approach and slowly adds in that fairy tale feel and I mean classic fairy tale, not the fluff that Disney serves. It very much feels like a children’s story meant for adults, and I think that is my main draw to Gaiman’s work. I love the whimsy that he manages to mix with darker plot elements. I loved that it focused on the main character as a kid, and held onto those childlike emotions even when the content becomes more graphic. Seeing as I’ve only read two Gaiman books I find myself unsure of what to expect when I pick one up. I know I’ll get a book with his signature bedtime story style, but the content is always something I wonder about and Ocean at the End of the Lane was so wildly different than I what I had expected.

The story is incredibly short, but I never wanted it to end especially since I had Gaiman himself narrating the audiobook. His voice is like a more soothing Alan Rickman, and honestly I could listen to his voice all day…which I did and then pouted when the audiobook ended. His a fantastic reader. If you’ve already read the book, then I still urge you to find or borrow the audio edition because he brings his own characters to life in a way only an author can.

This entry was posted in Book Reviews (2015) and tagged 4.5 Stars, audiobook, fantasy, review. Bookmark the permalink.

5 Responses to Audiobook Review: The Ocean at the End of the Lane by Neil Gaiman