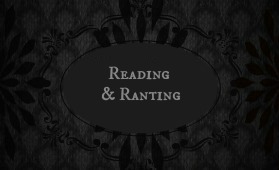 Today’s Reading & Ranting is not going to be fluff and deals with Depression, and my personal struggle with it. So if you don’t want to read it I don’t blame you. That being said I think an open forum on mental illness is important. I did a previous post about social anxiety as well.

When the World Becomes Grey

This past year has been amazing in terms of progress when it comes to my own personal health issues, namely anxiety and depression. However I wanted to just talk about my experiences because there is a level of understanding that needs to happen before the mental health crisis becomes something we have somewhat of a handle on.

I refuse to call these two illnesses my ‘demons’. They are not ‘demons’ because I’ve done nothing to suffer their wrath, they didn’t “choose” me, and it’s not something I can just conquer with faith & hope. No matter how much I wish it different, they are my reality and I have to live despite their presence. Or in spite of.

I’ve dealt with depression since middle school, I was in 8th grade when the weight descended and I got my first glimpse of what it was like to live in a darker world. Needless to say I didn’t handle it well. Self-harm and suicidal attempts were now a reality. In hindsight I could see the difference between the way I saw my world and the way I see it now. The pain felt like it could be explained by everything: maybe it was the fact that I was denying my bisexuality with near vehement fervor, maybe it was the fact that I was trying to be someone for everyone else and not myself, maybe it was the fact that I was starting to see that people were completely and totally flawed, or maybe it was because I realizing that my grandmother’s death when I was 8 meant that I’d never share anything with her again. And maybe it was one of those or all of them, depression is caused by a lot of different reasons. But now I can see that depression and anxiety (and a few other mental health issues) runs in my family, and it probably would have hit me at some point no matter what. Back then pain took away the internal hurt and suicide WAS an option, whereas now I see it as a road I never want to travel ever again. As I got older and entered high school things became a bit more technicolor…but the grey never completely disappeared. I was happier, I had better friends, and I could be who wanted to be…sort of. It was progress in some ways, in others it was just me pushing actual issues to the side in favor for those moments of color.

Then college happened – Hello wake call, could you ring a little quieter?

They say college is hard, but they fail to say why. They make you assume it’s because the of the classes, and maybe for some people that’s the case, but for me it was a huge internal battle I wasn’t ready to face. I got my first taste of full blown anxiety since I was a kid crying to go home at the sleepover, and depression seeped back in. I lost weight. Considering that I never hit 100 lbs before college, this became an issue that wasn’t easily ignored. I was put on antidepressants, which helped but not enough. Then I came home for good. College wasn’t worth it, I didn’t like it and probably never will. I spent years in my house without leaving except for a couple of days a week, because it felt safer there. Depression dragged me down, I stopped taking my pills, and I spent most days in bed.

So what changed? The way I think and better medicine.

Now I can look at the way I feel and know it’s not something I’m choosing. I can now tell the difference between wanting to stay in bed because it’s a lazy day and wanting to stay in bed because the world is too loud. Some days it’s too much and I give in, but most of the time I face it head on and push through. Does it make the feeling go away? No. If it were that simple fighting it wouldn’t be that bad, it wouldn’t be a war I could lose. But that’s what Depression is. It’s a war against oneself and you fight battles on a regular basis. I use to think you could lose battles and win the war, and in some ways you can…but in this case it’s different. Losing a battle, means you give into the weight and let it bring you down temporarily. Losing the war means I end up as a story in the paper. It’s a harsh reality and one you can’t predict based on battles won or lost, because it takes one bad moment to change a normal battle into a fight for your life. One moment where things get to be too much, where your brain insists that nothing will get better, where you stare out at the options in front of you and it looks like the only door open is one that normally stays closed. So now I see it like this:

As long as I keep breathing, I’m winning.

I now battle it with completely knowledge and awareness, with people who support me, and medicine to keep me as balanced as possible. But if I hadn’t conceded, broken down my barriers and told someone then I wouldn’t be the way I am today, I’m not even sure I would be here period.

The point of all of this isn’t to upset you or ask for your pity. It’s more of a plea for understanding and a note to let others know that even though you feel completely alone in this…you don’t have to be. Depression will have you believe you’re on your own and that no one will understand, or that you’re not worth the effort. BUT I’m telling you, as one human to another that you ARE worth it and there ARE people out there who will understand. Only you can fight it, but ask for help and you’ll find that there will always be someone out there to help you. It might not be your family or your current friends, it could even be someone online or just your doctor. It’s nothing to be ashamed of and it’s not your fault. We didn’t choose this for ourselves, so you shouldn’t have to carry the burden alone. Reach out to someone, even if it feels pointless you’ll find that having an ear to hear you and a shoulder to lean on and it could give you a bit more strength to carry forward. If you can’t think of anyone to talk to then know you can talk to me. I might be a stranger, but if you need help I will do everything I can to be that person for you.

To those who know someone with depression: Help us. Dealing with depression is never easy and it takes many forms, so handling it can’t formulate into a text book approach. You can help by just being there, even when it doesn’t seem like we need it. Everyone needs something different, but keep that line of communication open. It won’t always be easy and I’ll be the first to tell you, it’s going to be a journey that requires a lot of energy from you if you’re not accustomed to it but please be patient and be as open and constant as you can be.

This entry was posted in General and tagged reading and ranting. Bookmark the permalink.

6 Responses to Reading & Ranting: When the World Goes Grey