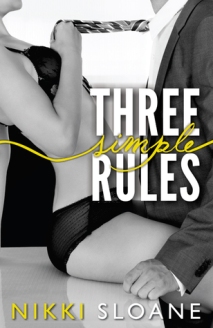 I would do anything for my dream job. Now I have to.

In order to save my skin at the office, I’m forced to sell it at an exclusive and illegal blindfold club. He paid thousands of dollars for one night to own me, but when my blindfold comes off, I want more. More nights, more rules, and more from this unavailable and uncompromising man.

Rule number one, no questions. Rule number two, no lies. But, rule number three? That’s the hardest one to obey.

Three Simple Rules is a new release that wasn’t on my radar until a facebook party, and I’m so glad I found it. When people recommend me erotica books it’s always the same titles and same authors, and I feel burnt out on them without ever picking them up. So I definitely welcomed something new, and I definitely think this is one I could recommend to people who want to try a new author and not be disappointed.

The story is one that didn’t sound like idea of a good time, I’m not really into selling your body for money as a motive for a relationship. However I actually thought it was a good move in this case. Evie is a graphic designer, who has screwed up royally on one of her client’s products…and in order to pay the company back without it ever being an issue she resorts to becoming an escort for one night. This book is absolutely filled with sex, but it also has a pretty great storyline and the characters take time to develop both their own personalities and their relationships. So while it does get hot and heavy towards the beginning of the book, you are still giving enough time to appreciate Evie in her normal surroundings and the same goes for Logan, her boss. Another thing worth praising is the fact that every intimate scene felt different and I didn’t find myself getting bored with repeat performances or over used words. I love the idea of the Blindfold Club being a foundation for this series, and having gotten to know Evie’s best friend more the next book should be just as good as this one was.

Evie is very likable. She’s a hardworking, independent girl with the drive to succeed in her field. She doesn’t want to sit on the backburner and isn’t afraid to take risks…at least professionally. I loved that she was more vulnerable outside of the office and that despite her drive to do what she needs to do, it takes her a bit to warm up to the idea of spending a night at the Blindfold club. Logan took more time to like for both the reader and Evie. The physical attraction was without a doubt noticeable, but both characters were fully aware that their relationship required more than just some heated moments and spent a lot of time getting to know each other outside of the bedroom.

It’s safe to say that Nikki Sloane is now on my ‘to-watch’ list! I can’t wait until Three Hard Lessons comes out in April! If you like incredibly spicy romance novels, or you’re just looking for a new erotica author to try out then go get Three Simple Rules! It’s well worth the $2.99.