Posted on January 3, 2015 by Michelle @ In Libris Veritas 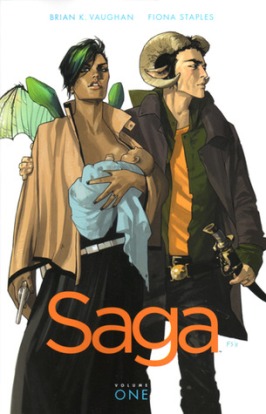 When two soldiers from opposite sides of a never-ending galactic war fall in love, they risk everything to bring a fragile new life into a dangerous old universe.

From New York Times bestselling writer Brian K. Vaughan (Y: The Last Man, Ex Machina) and critically acclaimed artist Fiona Staples (Mystery Society, North 40), Saga is the sweeping tale of one young family fighting to find their place in the worlds. Fantasy and science fiction are wed like never before in this sexy, subversive drama for adults.

This specially priced volume collects the first six issues of the smash-hit series The Onion A.V. Club calls “the emotional epic Hollywood wishes it could make.”

There are three types of comics: The really good ones, the maddeningly bad ones, and the ones that are labeled “amazing” when really they are “meh” at best. Saga fits in that last category for me.

Saga is a weird mix of fantasy and science fiction, which both worked and sort of failed. Our narrator is in fact the child who at this point is only days old and is on the run with it’s parents. They’ve both abandoned their posts in the military to be together, which would be somewhat less severe if they hadn’t been from opposing sides. I both understood and was completely baffled by the plot in this one. I got the basis of it. Two warring sides, two people who fell in love and are now fugitives are trying to escape their death sentence, bounty hunters are trying to find them…simple stuff. Then there are the things like robots with human bodies and tv screens for heads, a sex planet, a rocket made of wood (yeah because apparently no one has told them this is a crap idea), and the lack of continuity when it comes to alien species. One of my biggest pet peeves when it comes to aliens is when there is only one of something portrayed, or worse when there are a ton of species and no indication that there is truly an actual race of these people. Saga does that. Apparently the space in which they have manage to travel is rather huge or at least it’s a section of space that is densely populated by not just a few alien species but tons…and only like 6 of those have more than one of their kind represented. *internal screaming* One way this could have been fixed would have been world-building. Most comics take advantage of the visual medium for world building, but this one really doesn’t and it doesn’t actually tell you more than the plot as it centers around these three, so I was sort of confused as to how large a scope I was looking at. Are there a ton of planets? Are the robots a race created by someone else? How the hell is it pregnant? How the hell does the tv screen work with the human body? In short, I have a ton of questions. I don’t expect 6 issues of a comic to explain everything, but I would like atleast something explained.

The dialogue/humor in this one is actually really good and paired with the awesome art style it did made for a quick read entertaining read. Those two reasons are a big factors into what makes me want to read a series, so while I have a ton of complaints about it I still want to give volume two a shot. The story holds a lot of promise and I’m just hoping that in the next 6 issues I’ll see some of that promise come to fruition.