Mini-Read Review is a feature created here on In Libris Veritas in order to showcase the reviews for short stories and novellas which so often get over looked. 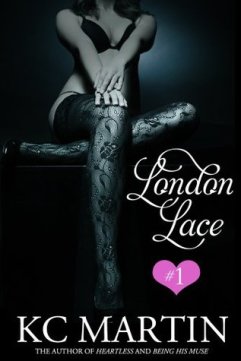 London hat designer Eliza Keating is sent on a date by her friend Lady Victoria Manning. Sir Todd Montgomery appears to be a proper English gentleman, but appearances can be deceiving. He has a passion for raising race horses, and his desires come first in his life. He has little time or patience for women, especially those as independent as Eliza. The date goes awry, and it will take a lot more than an apology to get back on Eliza’s good side.

London Lace is another fast paced erotica novella series, that has a lot of potential. Eliza Keating is set up on a blind date with her best friend’s cousin, who turns out to be an ass. One drunk phone call later and his at her house making apologies. It does have a dose of insta-love, which I had hoped would only go so far as physical attraction but there are some unrealistic promises made towards the end that had me scoffing. It was definitely steamy though, and I really liked the overall setup for the plot. I’m all for serials like this that actually give you characters with lives and personal ambitions outside of the bedroom. Eliza has built her success herself and strives to stay at the top of London fashion, and Todd has his money in horses races…hats & horse racing are a match that can’t be beat. I’ll definitely be continuing this one.

My name is not Gretel. It’s Leah. I’m not the dish-washer. Or the kitchen girl. I’m not one of Mother’s pets – at least not anymore. I’m not a storybook girl no one sees. Because my author changed my story at the last minute.

Now you have no idea who I am, or what my story is. Only one part is still true: I find him. He’s mine—the one called Hansel. I’ve still come here to claim him.

I’m Hansel, and I was a crazy woman’s toy. It’s taken years, but I’ve finally forgotten everything that happened at The House. Including Leah. Okay, that’s not true. I live for sex with girls who look like Leah.

I remember her. I need her. She was mine.

I really enjoyed the authors other series, Red & Wolfe, and I’m all for contemporary spins on fairy-tales..albeit these are a darker and steamier version of those tales. I wasn’t fond of Beast because the main guy was basically a dick and being an asshole is not sexy. Hansel however has more promise. The background story is a bit odd and certainly leads to having damaged characters like Leah and “Hansel” (Lucas) who seek ways to cope in unconventional ways. For Hansel it lies in BDSM sex shows in Vegas, with a stage that alludes to his past at the House. This story is a bit over the top, but I like the unique setting and it does add a bit of drama. The scenes between Hansel and Leah are full of tension, mostly because there is a mask keeping him from knowing who she is. That being said I still had some issues with it, which mainly lie in the fact that I eye-rolled a lot during this and has to do with my personal preferences for writing types (which Ella is on the edge of). It’s still a great read though and I will be continuing this series.