Posted on December 1, 2014 by Michelle @ In Libris Veritas 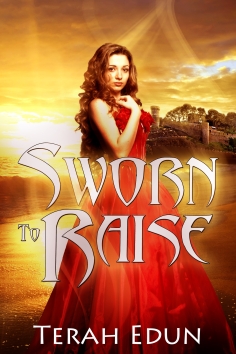 Seventeen-year-old Ciardis has grown up in poverty, a cleaner in a small vale on the outskirts of the empire. But beneath her empire’s seemingly idyllic surface lies a hidden secret. Whispers of an inept crown Prince are growing ever louder—intensified by the five year anniversary of the soulbond initiations.

Amidst scandalous whispers, Ciardis finds herself chosen to train for the Companion’s Guild. She leaves her home and sets off on a personal journey to become a Court Companion. A position she’d never thought possible for a lowly servant to obtain, she must prove that she has the skills to attract a Patron.

But she must master those skills quickly. If the legends are true, only Ciardis can harness the power to raise a Prince in an Imperial Court sworn to bring him down.

Sworn to Raise managed to fill my need for a light fantasy novel, while still providing some interesting backstory and new magic system.

Ciardis does fall into the troupe of “unknowing chosen one” since she is plucked out of unlikely circumstances and suddenly finds out that her family is one of the more powerful magic families out there but I did like Ciardis despite this. She’s a sweet but feisty girl, who works hard, and is highly independent. Not to mention she doesn’t fall head over heels for anyone in this book, despite the premise centering around her finding a Companion within the Imperial Court. The whole idea is of a companion is somewhat similar to finding a marriage partner, except you have better social standing and receive more power. Plus it’s more of a strategic move than a romantic one, which I really liked the idea of. It added a touch of political intrigue that I wasn’t expecting.  The idea of a Land Wight is also a new one to me, and while I would have loved more details about it, I really liked the way it played into the story. Ciardis’ mentor and sponsor was also a nice addition tot he story with her rather scathing sarcasm.

Part of the problem I had with the story is that in it’s simplicity and ease it lost some of the time needed to grow the story naturally. A lot happens in this 265 page book, and I would have loved to see some inner conflict about joining the companions or some more scenes with the Prince before an alliance was ever formed.

Overall it’s one of the more shallow fantasy novels, but for someone who might might enough page after page of detail this is perfect and it certainly filled that need for me. I can’t wait to see how Ciardis’ decisions in this book play into book two and how people will react to her alliance with the prince.

4 Responses to Review: Sworn to Raise by Terah Edun