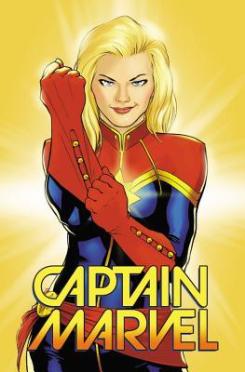 Hero! Pilot! Avenger! Captain Marvel, Earth’s Mightiest Hero with an attitude to match, is back and launching headfirst into an all-new ongoing adventure! As Captain Marvel, a.k.a. Carol Danvers, comes to a crossroads with a new life and new romance, she makes a dramatic decision that will alter the course of her life – and the entire Marvel Universe – in the months to come. But as Carol takes on a mission to return an alien girl to her homeworld, she lands in the middle of an uprising against the Galactic Alliance! Investigating the forced resettlement of Rocket Girl’s people, Carol discovers that she has a history with the man behind the plot. But when the bad guy tries to blackmail Carol and turn the Avengers against her, it’s payback time! Guest-starring the Guardians of the Galaxy!

I’m completely new to Carol Danvers as Captain Marvel even though she’s been around for a little while now. I’ve always known her as Ms. Marvel, though she’s had other names  (War Bird, Binary). Christya over at More Than Just Magic and Women Write About Comics was reading it and since her comic book recommendations are always fantastic I went an purchased the first three issues, now I’m in love. There are better comic books out there, but I love Carol’s attitude and the way she handles situations.

These first 6 issues are a great introduction to what she can do and who she is. Carol wants more and takes Tony Stark up on helping out with the cosmic Avengers initiative, and her first mission is to return a young alien girl to her homeworld. Unfortunately the world that Carol is to drop her off is in the middle of power struggle with the Galactic Alliance. Their people are falling sick and they need help but the Galactic Alliance is ready to cut its losses. It does take a few issues to really get into the meat of the story but the overall pacing and tone of the story is pretty good. Space is a great place for someone with such a wide range of powers and strengths, and there are a few scenes in this one that I absolutely love because they show off how much of badass she is. Also the Guardians of the Galaxy make an appearance a bit later into the story and it’s amazing seeing Carol trying to handle Rocket.

Carol definitely has a new fangirl, and now I’m determined to find the older volumes and read those. I really hope this series keeps it’s traction, especially now that we know she’s getting her own movie.