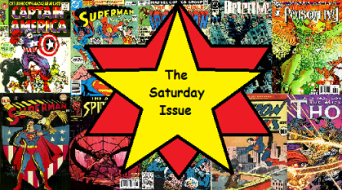 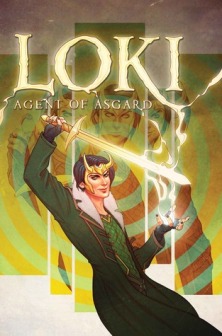 Kid Loki’s all grown up – and the God of Mischief is stronger, smarter, sexier and just plain sneakier than ever before. As Asgardia’s one-man secret service, he’s ready to lie, cheat, steal, bluff and snog his way through the twistiest, turniest and most treacherous missions the All-Mother can throw at him…starting with a heart-stopping heist on Avengers Tower! And that’s just the beginning, as Loki takes on Lorelei in Monte Carlo’s casinos, and heads back to the dawn of Asgard to join its greatest heroes on a quest for a certain magical sword! But when Loki puts together a crew to crack the deepest dungeons of Asgardia itself, there may be one plot twist too many for even Loki to handle!

Riding off of the success of Loki’s character in the Marvel Cinematic universe (thank you Tom Hiddleston!) Marvel gave Loki his own stand-alone comic series that takes place after the events of Young Avengers. Kid Loki is all grown up and off to try and right the wrongs of his past.

I really love Loki in all of his forms: Old Loki, Kid Loki, Marvel Now Loki, Lady Loki, Silver Age Loki…he’s incredibly fun to read about and it’s always cool to see how/when he’s pulling strings behind the scenes. Plus I like to see what he can get away with before someone realizes just what he’s doing. This series is no different. Loki is dealing with some serious guilt (for events I won’t mention just in case you haven’t read Young Avengers) and now he’s taking missions from All Mother Frigga in order to atone for his “sins”. He’s allowed to use whatever means is deemed necessary and he soon collects a small effective team.Loki is charmingly devious when it comes to getting things done, and he makes a really good anti-hero. But like all things with Loki, everything is no so simple or what it looks like.

This first volume has some excellent issues in it, I love the portion with Sigurd and Loki on a mountain as well as one of the stories about Old Loki trying to get gold from a fish.

I’m looking forward to continuing this one and I’d definitely say it’s a strong start for this series, here’s hoping that Marvel keeps it going. Obviously the fans of movie Loki will enjoy this one, but I also think anyone who enjoys Thor comics should try it out and see how it goes.

This entry was posted in Book Reviews (2014) and tagged 4 stars, graphic novel. Bookmark the permalink.