Who ever knew the end would come so soon?

In this final volume of the BLOOD SKIES series, Eric Cross and Danica Black find themselves facing impossible odds in the desolate ruins of the world they once knew. Hunted by the mercenary forces of the newly formed East Claw Coalition and desperate to find the elusive White Mother, the two refugees will be pushed to the limits of their abilities and sanity as they struggle to survive.

Meanwhile, in the near future, the undead hunter called Reaver searches for the lost city of Bloodhollow, the place where humankind will make its final stand, while the undead of New Koth and the rebellious White Children make their push to end the reign of the Ebon Kingdoms once and for all.

As timelines collide and the spider weaves her web, the battle for the fate of the riven world will come to its violent conclusion in the depths of a forgotten city, where unlikely heroes will emerge and hidden evils shall finally be revealed…

I’ve spent the past 3 years of my life chronicling the tales of Eric Cross, Danica Black and the rest of the heroic cast of the Blood Skies series as they battled their way across a post-apocalyptic world through vampires, gun-toting cyclopi, werewolves, undead, shadowbound sorcerers, fate-altering spiders and a bunch of other stuff that somehow manages to get even weirder.  I was asked to come up with my 10 favorite “moments” in the series.

What a great question, I thought.

I’ve tried to approach this from a writer’s point of view – my 10 favorite moments to write, my 10 favorite scenes that actually played out on paper like I wanted them to when I first imagined them in that tin can that passes for my skull.

This was not an easy list to put together.  I’ve thoroughly enjoyed writing this series, even when it was driving me crazy, and I have as many fond memories of putting the story to paper as I do interacting with all of my author friends and fans (still weird to say it, always will be) I’ve met online.

And I’d be remiss if I didn’t warn you of ALL OF THE MAJOR SPOILERS! that will be present in this list.  I’ve tried to keep things vague, but I may slip up now and again.  Sorry.

So, without further ado, and presented in descending …

10. Eric entering the necropolis of Koth in “Blood Skies (Book 1)”.  I felt like that was one of the first points in the book where I found the exact level of detail I was looking for.

9. The first time Eric steps into the arena at Krul in “Black Scars”.  It’s the reader’s first glimpse inside the vampire’s world, and I’ve always been proud of how that scene reads.

8. The stand-off inside Shul Ganneth when Danica and Cradden meet to negotiate over Cole, also from “Black Scars”.  To date no one has guessed which John Wayne film that scene was based on…

7. The moment Cross discovers the abandoned settlement in the Whisperlands and learns what it is the Shadow Lords want. (From “Crown of Ash”.)

6. Ronan’s duel with Lady Riven and subsequent descent into the ravine to face the Maloj, from “The Witch’s Eye”.

5. The entire assault sequence on the Bonespire at the beginning of “Soulrazor”.  It’s really the only time we see the entire team in action, and I thought the scene played out well.

4. Creasy’s exploration of the lost city in “Chain of Shadows”.  I gave myself goosebumps writing that sequence.

3. The team’s return to civilization, also at the end of “Chain of Shadows”.  I’d been picturing that scene since the first draft of “The Witch’s Eye”, and it was nice to finally write it.

2. The death of a certain important character in “Crown of Ash”.  The scene played out much as I’d envisioned, and I felt horrible doing it, but it had the desired effect.

1. The final climactic battle in “Vampire Down”.  I’d envisioned that scene ever since I was writing “Crown of Ash”, and even after waiting nearly a year to actually type it down I can still say I’m very proud of the way the entire series essentially comes together in those last few chapters.  I hope you enjoy reading it as much as I enjoyed writing it. 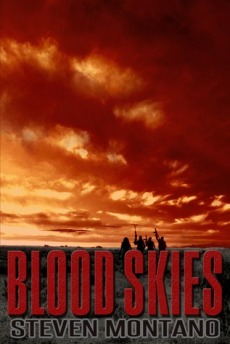 In the time after The Black, human survivors of the Southern Claw Alliance clash with vampire legions of the Ebon Cities in a constant war for survival. Earth as we know it has been forever damaged by an arcane storm that fused our world with distant realms of madness and terror. Things that once existed only in our nightmares stalk the earth.

Now, humanity is threatened by one of its own.

Eric Cross, an enlisted warlock in the Southern Claw military, is part of an elite team of soldiers and mages in pursuit of a woman known as Red — a witch whose stolen knowledge threatens the future of the human race. The members of Viper Squad will traverse haunted forests and blighted tundra in their search for the traitor, a journey that ultimately leads them to the necropolis of Koth.

There, in that haven of renegade undead, Cross will discover the dark origins of magic, and the true meaning of sacrifice…

Experience a dark and deadly new world in the debut novel of the “Blood Skies” series from author Steven Montano.

Blood Skies is the first book in a series that reads like an epic fantasy but is set in a world carved from the depths of hell. It’s a dark and death filled shadow of a world, and literally no one seems safe.

I’m in love with the lore that Steven created for the world in Blood Skies. The world as we know it has fallen into ruin and decay thanks to a mysterious event called The Black. The undead roam and kill, odd creatures hunt down humans, and some humans now have the capacity to use magic. There are vampires, wights, ghouls, creepy forests and those are not even the creepiest creatures lurking in the shadows. I also love the magic system. The fact that it’s more complicated than “oh I have magic just because” is a huge draw for me. The connected spirit companions and their roles was an incredibly new concept to me and I love it when books surprise me and offer something new.  I’m already a fan of Steven’s writing thanks to his other series (The Skullborn Trilogy) so it’s no surprise that I enjoyed it here. I had a few issues trying to understand everything in the beginning but I’m use to the learning portion when it comes to ‘epic fantasy’. It takes a while to process it’s just a matter of enjoying the ride, and I did.

Eric Cross is a mage with the Southern Claw Alliance, and he has been tasked to track down a very dangerous traitor along with his squad. Of his group he is the one with the least experience but thanks to his magic he can hold his own.  Eric goes through a lot in this book, and while he doesn’t have the best disposition at times (and I can’t really blame him) he does have a lot of willpower and courage to keep moving forward. He has his flaws but he also has a ton of strengths that far outweigh any negative and make him a character worth following.

Overall I think this is a series worth trying out! It won’t be for everyone, but if you enjoy epic fantasy with a dark twist then please go check it because I need to talk to someone about the ending!!

Signed Copy of any book in the Blood Skies series