Review: Take Me To Your Reader Anthology 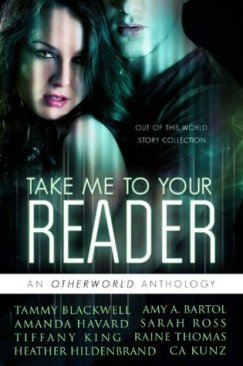 The two most powerful questions in the universe are “What if” and “Why not.” The best-selling and talented authors who contributed to “Take Me To Your Reader” let those questions guide them when they composed these original and never-before-published stories that combine the most exquisite parts of science fiction and romance. Escape to new worlds of adventure, bravery and love.

“The Divided” by Amy Bartol (Premonition Series. ‘Under Different Stars’)
–> Death divided them. Will she survive his return?

“Ultra-Con” by Tiffany King (The Saving Angels Series. ‘Miss Me Not.’ ‘No Attachments.’
–> Discover what happens when extra-terrestrial fantasy meets reality.

“The Black Stone Heir” by Sarah M. Ross (The Patronus Series. ‘Inhale Exhale.’)
–> A dangerous close encounter will thrust them together.

“The Ascendant” by Raine Thomas (Daughters of Saraquel Trilogy. Firstborn Trilogy. ‘Meant for Her.’ ‘For Everly.’)
–> A girl destined to rule worlds.

Inspired by the #utopYA2014 writer’s conference theme “aliens and outerspace,” these eight authors and friends combined their extraordinary talents to help support the conference that was created to support established and aspiring writers, bloggers, designers, and other publishing industry experts. Proceeds from the book will fund utopYA’s mission efforts of collaboration, education and inspiration.

Take Me To Your Reader is an anthology put together in honor of the 2014 UtopYA convention. The theme of the convention and the anthology being aliens and outerspace. I read this before my trip and I’m glad I did, because I found new authors just in time to have a chat with them and download a few of their books onto my kindle.

This was really interesting! I loved the unique feel of the aliens involved and how there was an easy to understand complexity to their nature. It’s definitely one of those stories you wish had a series to go along with it. I did have a bit of trouble taking the proper nouns seriously though. This is also the longest story in the book.

This one took a more contemporary feel while maintaining the alien theme. It’s actually incredibly sad and heartwarming, but it’s also rather short. I liked the idea of the ‘alien’ species traveling to other worlds to help eradicate monsters, whatever they might be.

The House on Maple Street is an incredibly fun story with bizarre aliens and a brainwashed town. While I wasn’t fond of one of the side characters I found myself enjoying every bit of this one. It also had me craving hot fudge sundaes and Blizzards from DQ.

The Force is part sci-fi coming of age and part Hangover! A group of guys (aliens of course) come to Earth for a week and after a wild night they find themselves in quite the mess with only hours before they their shuttle arrives. It’s a really fun story with a touch of cute romance.

This is probably my least favorite of the bunch. I didn’t really connect with the main character, which is unfortunate since the whole thing takes place at a geeky convention. It’s like Body Snatchers meet Comic Con, and while it was a fun read I just didn’t find myself too interested in it.

I loved this one! It’s a really sweet and heartwarming read, that made me smile.

This was another really interesting one. There was a lot of cool ideas packed into a short story and I really wish there had been more. I loved the aliens and the dual POVs. I definitely want to read more from this author.

The Ascendant by Raine Thomas

This one sort of confused me a bit. I wanted to understand the “whys” and “hows” more but with the story being so short I never got that chance. The whole premise of the story is really awesome, but I wanted to know more about the main character and her guardian.

Overall it was a great collection that really put me in the mood for an equally great convention! I definitely recommend grabbing this one if you get the chance.