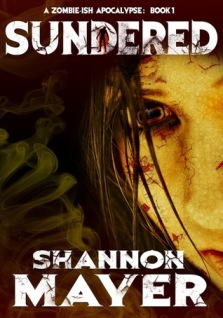 The side effects were anything but hopeful.

Mara and Sebastian are young, in love and newlyweds. Far too soon, they will face tests to their love that most others won’t survive. Their bond strengthens with each loss, destruction and unbearable race against time. In each other, they find the will and hope to endure. Hand in hand, they will face the darkening of humanity with strength and integrity and an undeniable spirit to survive; together.

Sundered was my random kindle pick for February and it’s been sitting on my Kindle for a really long time now so I was eager to get into it and see what exactly a “zombie-ish apocalypse” is. I found the overall story to be rather unique and emotional but it’s downfall is in the short length of the book.

As with many zombie apocalypses Sundered’s zombies are brought on by a medical advancement that took a turn for the worse. Instead of being the miracle drug everyone was hoping for it turned into the very thing that killed them. I did enjoy the difference in the zombies and how they were not technically zombies. They sill maintain some intelligence and they don’t infect people with their bites. I thought the whole intelligence thing was a great move because while zombies are scary in their mindlessness there is something really eerie about having a human act out their baser animal natures while still maintaining the know-how. Also…goat eyes, I’m not sure if you’ve ever been near a goat long enough to stare into their eyes but they are freaking creepy and I really like goats. If I saw them on a human I’d probably just throw my hands up and hide in bed for the next year. There were some moments where the conversation felt a bit forced and some of the scenes could have benefited from some more time.

Mara and Sebastian are okay characters and while I understood their lives, what they wanted, and where they come from I didn’t feel like I knew them enough to truly care for them. I think this is mostly due to the very quick nature of the story and how little time we are given with pre-apocalypse Mara and Sebastian. I did like their dedication to each other ad felt their reactions to their lives falling apart was pretty spot on, and there were some situations that caught me by surprise and made  me think of how I would handle something like that. Here’s a hint…I probably wouldn’t handle it well.

So while Sundered was a really interesting story and I enjoyed the rather trying journey that Mara and Sebastian have to go through in a few short months, I felt it needed more time to naturally flesh itself out.

This entry was posted in Book Reviews (2014) and tagged 3 stars, horror, review, sci-fi. Bookmark the permalink.