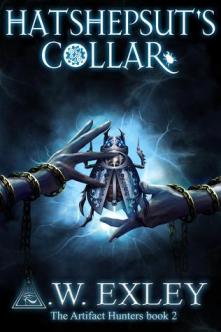 *
*I receive a small monetary kickback from Amazon purchases
Rating: 4.5/5

“Loving you is easy, it’s living with you that’s killing me.”

An ancient Egyptian artifact is driving Queen Victoria insane, and that’s not top of Cara Devon’s growing list of problems.

Viscount Nathaniel Lyons is a man of numerous secrets, but there is one in particular that threatens his fledgling relationship with Cara. Stunned by Nate’s revelation, and before she can absorb the ramifications of his actions, he is arrested, charged with treason and imprisoned in the grim Tower of London. He stole something the mad queen wants, and only has days to deliver, before his date with the executioner.

Although sorely tempted, Cara can’t let him die on Tower Green, not when their connection means she would share his fate.

Only together can Cara and Nate figure out how to wrestle Hatshepsut’s Collar from around the queen’s neck, before she plunges Britain into a world war. The search for answers sends Cara to the opulent Winter Palace of St Petersburg and the frozen depths of Siberia, with every step shadowed by an enemy with his own dark plans.

Cara Devon is back and she’s ready to take on just about anything. The first book took me by surprise with how much I ended up enjoying it, so as soon as I saw this cover I just knew that I needed to read it. You can read my review of book one, Nefertiti’s Heart, here: Review

The world that Exley has created is so rich and vibrant that I feel like I could easily step through the pages and see the Victorian era, brimming with excitement and gossip. The steampunk elements are still incredibly well done and integrated so well that it’s hard to picture the time without them. My favorite invention has to be the steam-powered horses, which sound completely beautiful. Exley actually managed to surprise me with a few new fantasy elements in this one, but without saying too much so I don’t spoil it I will say that after my initial shock I really thought it was fun. Unlike Nefertiti’s Heart this book takes us out of London and into the Russia, with new people and a new goal. If you thought a steampunk London was beautiful then Russia really manages to seem like something straight out of a painting.

Cara is still her fiery self and she has a lot to fight against in this one. Nate has done some extremely stupid and just when Cara is ready to rake him over the coals for it, he gets arrested. She’s one seriously tough and independent lady, and I’m so happy that even though she’s with Nate she hasn’t lost that edge…if anything she’s more fiery than before. Nate does a lot of growing in this as well and I enjoyed finding out about some of his well hidden past. My favorite character however is Loki, who is probably the most delicious steam-punk pirate I have ever had the pleasure of reading about. I remember dying to know more about him in the first one, and this book gives us details (serious and sensual) abound! I really hope the next book includes some more airship flights because I don’t think I can get enough of Loki.

Overall Hatshepsut’s Collar offers the same unique mystery elements as the first book, while maintaining the fun adventure and sexy romance. This is probably one of my favorite Victorian era series right now and I really can’t wait until book three is in my hands.