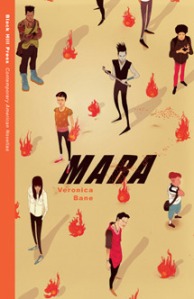 For years, Mara Tucker has used her power of manipulating flames to punish those who have done her wrong. But things are changing in the town of Jericho. Rampant disappearances have forced Mara to seek out others with special powers. In a story that confronts the violence and turmoil of adolescence, Mara and a group of other “unusuals” like her grapple with new alliances and the villains pressing in all around them.

“A tale of teenage rebellion in the tradition of classics ranging from The Outsiders to The Hunger Games, Veronica Bane’s fantasy novella explores the timeless themes of growing up, finding one’s inner strength, and discovering where one belongs. The titular antiheroine and her flawed-but-lovable band of “unusuals” are characters that will resonate with teen audiences and older readers alike.” –Ashley Heaton, Editor

Mara is a thrill ride of emotion that will appeal to those who enjoy Avatar: The Last Airbender or Legend of Korra.

I really enjoyed the plot and pacing of Mara. I’ve fallen in love with the idea of being able to control the elements thanks to the two shows I mentioned above. It’s so cool so see someone take something as wild and dangerous as fire and learn to control it, so it’s no surprise that I really loved that portion of this book. The characters really personify the element that they have sway over and I liked seeing them mingle as a group, their personalities clashing and to see them struggle to overcome their differences. The plot revolving around the killing and kidnapping of others with similar powers was also really interesting and while I enjoyed the thriller type approach to it, I really wish I knew why some people developed the powers and others didn’t. I also wish I understood the whole Native thing, because I felt kind of lost on that aspect. However the story overall is pretty solid and the pacing makes this a quick read.

The really great thing about Mara is that the characters are all really different. Mara is really tough and quick to anger, she is just as fiery as her element and her past is really painful. I appreciated the flashbacks which gave some insight on why someone would grow up to be so unforgiving and place so much distance between her and everyone else. Besides Mara I really liked Miles, who is a normal kid but has placed himself directly in the middle of the danger. He really tries to be useful though he feels he’s pretty useless and I like how despite that he still tries. The other characters like Miyuki, Terry and Chris, have some really great personalities but in the case of Alex and Zach I found myself kind of disgusted.

Overall Mara was a fast paced and quick read that I found really fun, however I would have loved to have a tiny bit more world building. I’m not really sure about the ending and if this is a standalone or a start of a series, because every is left kind of open but I see no evidence that this is going to continue in another book. I do really hope that it does though because I really want to see what happens to the group and I’m hoping that Zach gets what he deserves.