Review: The Archived by Victoria Schwab

Posted on December 6, 2013 by Michelle @ In Libris Veritas 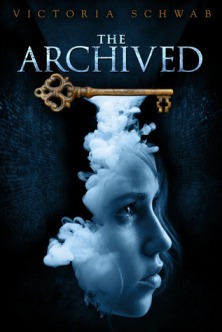 Imagine a place where the dead rest on shelves like books.

Each body has a story to tell, a life seen in pictures that only Librarians can read. The dead are called Histories, and the vast realm in which they rest is the Archive.

Da first brought Mackenzie Bishop here four years ago, when she was twelve years old, frightened but determined to prove herself. Now Da is dead, and Mac has grown into what he once was, a ruthless Keeper, tasked with stopping often—violent Histories from waking up and getting out. Because of her job, she lies to the people she loves, and she knows fear for what it is: a useful tool for staying alive.

Being a Keeper isn’t just dangerous—it’s a constant reminder of those Mac has lost. Da’s death was hard enough, but now her little brother is gone too. Mac starts to wonder about the boundary between living and dying, sleeping and waking. In the Archive, the dead must never be disturbed. And yet, someone is deliberately altering Histories, erasing essential chapters. Unless Mac can piece together what remains, the Archive itself might crumble and fall.

In this haunting, richly imagined novel, Victoria Schwab reveals the thin lines between past and present, love and pain, trust and deceit, unbearable loss and hard-won redemption.

The Archived is a wonderfully written venture into a unique take on the afterlife. It follows a teenaged girl named, Mac who is charged with the job being a Keeper and the sudden dangers of the slowly crumbling Archive. If I had to choose three words to describe it they would be: Unique, beautiful, and thrilling.

The Archived has two new places for us to feast upon, The Archive and The Narrows. Imagine a huge library, with rows and rows of shelves and the layer of quiet that’s almost eeriy, now instead of books replace them with bodies and you have The Archive. It sounds rather creepy but the way that Schwab handles it paints a picture of odd beauty, where everyone has a place and are protected by the Keepers. Unfortunately someone is disturbing the peace of The Archive and the Histories (the people housed there) are being altered. The Narrows to me seemed like the purgatory type level of Schwab’s afterlife. You know that scene in horror movies where the character is walking in a hallway and it suddenly seems longer and darker than it did before, that’s how I pictured The Narrows. It’s creepy, dark and full of doors. I loved the unsettling way it was presented and it’s such a great juxtaposition to the calming effect that The Archive has. Then of course we have the really interesting jobs that play a huge roll in keeping and maintaining the Histories and the Archive at peace. The plot takes a bit of building but once it gets started it becomes really hard to put the book down, I even found my self I bit surprised at times. There was only one instance where I found myself confused and that’s because Dad and Da are two different people.

Overall I really enjoyed all of the characters and while some of them probably won’t stick with me I thought they were handled great. Mac is one tough girl with some amazing fighting skills and her determination to keep up her work in the Narrows. However she’s human and she’s tired of the lying that is required of her and it’s making her somewhat weak under pressure. She has a lot of weight on her shoulders and I liked that she wasn’t completely invisible against it. She’s dealing with a lot of heartbreak and the way schwab writes really makes that emotion real and raw. Then there is Wes, who becomes a sort of rock for Mac. He’s rather upbeat despite his rather dour upbringing and really tries to help Mac the best that he can. I liked how goofy and real he seemed, which is great when you need a break from the cliche suave guys that come by the bunches in YA. I was a bit disappointed in how little we learn about him though and really thought that seeing a bit more of who he is would have helped me connect with him a bit more.

Without saying too much about it I do want to mention that one thing that brought the story down for me and that was the way a certain relationship of Mac’s was handled. I knew what path it was going to go down and I had my hopes that it wouldn’t. To me it felt a bit predictable and once it happened I had no trouble figuring out some of the other plot points a head of time.

However other than that I think this was one solid book and has really set the bar for the rest of the series. I can’t wait to see more of Mac and hopefully get to know Wes a bit better. I really enjoyed the mystery and eerie beauty of the Archived and I’m looking forward to learning even more about it.

10 Responses to Review: The Archived by Victoria Schwab