Saturday Issue Review: Morning Glories Volume 2- All Will Be Free 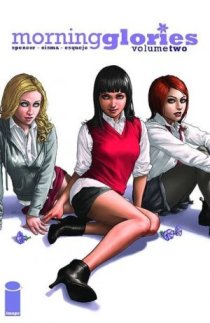 One of the most prestigious prep schools in the country…But behind it’s hallowed doors something sinister and deadly lurks. When six brilliant but troubled new students arrive, they find themselves trapped and desperately seeking answers…and escape from a place where nothing is what it seems to be! Learn the dark secrets of the Glories’ past lives as the mystery of the Academy unfolds.

With this volume each of the six Glories (Zoe, Hunter, Jun, Jade, Ike and Casey) are spotlighted, revealing secrets of their past and questions about their future

This book is an odd mix of fascination and confusion for me. I got more than I expected in terms of twists and horror, but I ended up with less than I want when it came to explanations.

The group is already pretty established in terms of personality, or so I thought because everything is given more depth and turned on its head in this one. I thought I knew some of the characters and had picked out favorites, only to learn even more about just what they are all capable of. I was glad to get the background on them and I really like the twists that were given, however I found most of the actual storyline confusing.

There is just so much about this school that isn’t explained, not to mention the way the individual character arcs are going. In the end I ended  up having more questions to answer. I’m really curious to find out what is really going on with this school and just what “the hour of your release” means.

Overall I enjoyed it but there was just too much going on and not enough explanations. I’ll probably read the next one but if it doesn’t at least give me something else to go on I mean end up dropping this series.

2 Responses to Saturday Issue Review: Morning Glories Volume 2- All Will Be Free