Posted on September 17, 2013 by Michelle @ In Libris Veritas 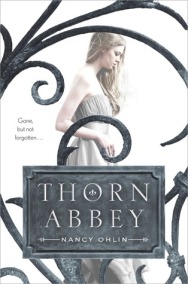 Nothing is as it seems in this darkly romantic tale of infatuation and possession, inspired by Daphne du Maurier’s Rebecca.

Becca was the perfect girlfriend: smart, gorgeous, and loved by everyone at New England’s premier boarding school, Thorn Abbey. But Becca’s dead. And her boyfriend, Max, can’t get over his loss.

Then Tess transfers to Thorn Abbey. She’s shy, insecure, and ordinary—everything that Becca wasn’t. And despite her roommate’s warnings, she falls for brooding Max.

Now Max finally has a reason to move on. Except it won’t be easy. Because Becca may be gone, but she’s not quite ready to let him go…

I have never read Rebecca so I didn’t really know what I was getting into when I sat down to read Thorn Abbey. I think when I saw infatuation and possession I assumed it was an overbearing lover and I saw the ghost element but didn’t expect much of it. However I ended up really enjoying how creepy an atmospheric this novel was.

It’s a slow moving book until about two thirds of the way through, where the pace becomes break neck. Tess is on a scholarship to Thorn Abbey, but finds herself way out of her element as she’s surrounded by privileged and rich kids who have very little in common with her. I can’t say she was the best main character though because at times she’s entirely too insecure and as a result puts up with some ridiculous crap from her roommate Devon. I understand that she wanted to fit in more but there is a limit I think. Devon is a mean girl…both in the literal sense and in the clique sense. She’s entitled and opinionated, and at times she goes from zero to creepy. She’s a bully and I just wanted Tess to tell her to shove it. Going with the tone of the novel we have a broody male character named Max, with whom Tess has become invested in. She finds herself entranced by him and while her swooning got a bit irksome I was pretty interested in his character myself. He’s really moody and his past with Becca is a mystery, so I enjoyed seeing every bit of that come to light.

I think this book’s saving grace is the overall creep factor and that I wasn’t really expecting it. I loved how once things are established as being a bit eery the whole place begins to feel that way. Add that to the fact that the book actually managed to surprise me and I ended up forgiving the fact that I wasn’t in love with the characters. I know a lot of people have a problem with the ending, but I actually liked it. Considering that tone of the novel is supposed to be kind of creepy and kind of depressing I don’t think it would have been right to end on a high note.

This is a book that benefited from my mood at the time. I can see me disliking this if I ever tried to re-read it at the wrong time, but I can see me loving it if I ever wanted a light novel for a spooky night.