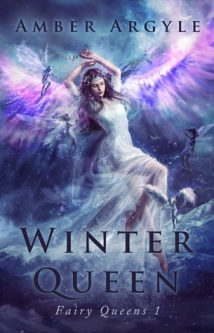 ~Becoming a winter queen will make Ilyenna as cold and cruel and deadly as winter itself, but it might be the only way to save her people from a war they have no hope of winning.~

Mortally wounded during a raid, seventeen-year-old Ilyenna is healed by winter fairies who present her with a seductive offer: become one of them and share their power over winter. But that power comes with a price. If she accepts, she will become a force of nature, lose her humanity, and abandon her family.

Unwilling to pay such a high price, Ilyenna is enslaved by one of the invaders, Darrien. While in captivity, she learns the attack wasn’t just a simple raid but part of a larger plot to overthrow her entire nation.

With the enemy stealing over the mountains and Darrien coming to take her to his bed, Ilyenna must decide whether to resurrect the power the fairies left behind. Doing so will allow her to defeat Darrien and the other invaders, but if she embraces winter, she will lose herself to that destroying power—forever.

Winter Queen focuses on the person journey of Ilyenna, a 17 year old Shyle woman with incredible responsibility and difficult choices. She’s the clan’s mistress and is seen as a leader despite her age. When hardships fall upon the clans thanks to the betrayal of another she finds herself shouldering the burden and gaining new unexpected allies.

In Winter Queen Argyle builds us a world of clans, subtle fantasy, and old-world richness. Ilyenna lives in a world where everyone must work together in order to live comfortably, each clan has it’s purpose and the friendship between them helps them to thrive. So when one clan turns against another things begin to fall apart and Ilyenna is put directly in the middle of it. I love the simple yet slightly complex way things are handled in this world. The fact that clan warfare can come with a price called Tiams, which are essentially indentured servants of sorts. They work for a period of time to assuage the wrong that was done. I also loved that while the fairies are vital to the story they take a background kind of role for most of the book. I don’t mind that such an important part of the book takes on very few scenes because Ilyenna is a human and her journey is a difficult one, more importantly while she has some help from ‘otherworldly’ allies she takes on the burden herself and deals with it the best that she can. The one thing I think that would bring more to this would be a world map, and not just because I’m a sucker for book maps. We do get to see multiple places in the book but it is clear that there are places we are not introduced to, and not to mention maps always help add depth to a story in terms of distance and terrain.

Ilyenna is a strong girl who is fierce, reliable, loving and a healer; and despite being so young she takes on the role of someone with immense responsibility and never backs down from it. Even when faced with beatings and the possibility of death she holds onto that strength, but I would say that her breaking point is always love. I also thought it was interesting that Ilennya is chosen as the Winter Queen who is meant to be her opposite, cold and destructive. It’s a nice parallel that really shows how a single person is capable of being so many things while still holding on to that essential essence of self. Darrien, the son of the Tyran clan-cheif, is a vile and disgusting man. He sees Ilyenna as someone to break and he has no issue with doing whatever he can in order to make that happen. To put it simply, he’s very good at being a terrible person. The battle of wills between these two is full of tension and there were times when I hoped Ilyenna would snap or that Darrien would somehow falls off a cliff.

I’m really glad that this is a series however because while we get to see Ilyenna’s full story there are other characters I definitely want to see more of like Leto, the Summer Queen. The few scenes that she is in show someone with great power and hint at someone who came from much less than that. I also want to see how Elise comes along and what role she’ll play in the future of their world. I’m also hoping we’ll get to see more of the cute little fairies and get some more details on their lives as well.

Overall I’m very pleased with the way the book turned out. It has some great imagery and a wonderful main character, not to mention all the promise for the future books.