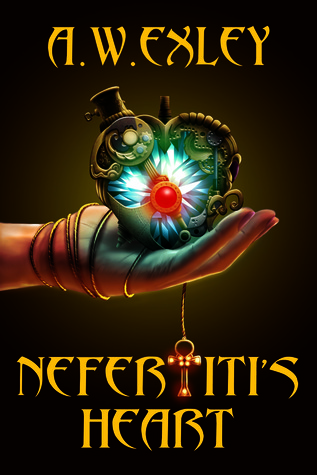 Cara Devon has always suffered curiosity and impetuousness, but tangling with a serial killer might cure that. Permanently. London, 1861. Impoverished noble Cara has a simple mission after the strange death of her father – sell off his damned collection of priceless artifacts. Her plan goes awry when aristocratic beauties start dying of broken hearts, an eight inch long brass key hammered through their chests. A killer hunts amongst the nobility, searching for a regal beauty and an ancient Egyptian relic rumored to hold the key to immortality. Her Majesty’s Enforcers are in pursuit of the murderer and they see a connection between the gruesome deaths and Cara. So does she, somewhere in London her father hid Nefertiti’s Heart, a fist sized diamond with strange mechanical workings. Adding further complication to her life, notorious crime lord, Viscount Nathaniel Lyons is relentless in his desire to lay his hands on Cara and the priceless artifact. If only she could figure out his motive. Self-preservation fuels Cara’s search for the gem. In a society where everyone wears a mask to hide their true intent, she needs to figure out who to trust, before she makes a fatal mistake.

First I want to send a big thank you to Curiosity Quills who, after I mentioned not being able to read the galley I received due to computer issues and having it expire on me, sent me an e-copy. I was completely surprised by this and their kindness has definitely left it’s mark. Now on to the review.

Nefertiti’s Heart is a delicious mix of historical romance, mystery and steampunk with an ever so slight sprinkle of fantasy. I originally snatched this one due to the name and the added steampunk element, so I was pleasantly surprised to find that I was also getting a delicious Viscount and an interesting murder mystery to go along with it. I know…that’s plainly visible in the summary, but between me and you I didn’t read it. I judged this one solely on the cover *blushes*. At any rate this one certainly did not disappoint on any level.

Cara Devon is a spirited and tough girl with an equally tough past. She always has a gun on her (in some cases two) and isn’t afraid to stand up to anyone, man or women. She’s not accepted by the Ton and in truth she could care less.  She’s my kind of woman; independent, strong willed, smart…what’s not to like? We also get the yummy Viscount Nathaniel Lyons, a stoic Alpha, who has his eyes (and occasionally hands) on Cara. He has a rather shady reputation and it’s not one that he strives to hide. The dynamic, not to mention tension, between these two is fantastic. One of my favorite characters in this was actually Cara’s grandmother, who I found to be hilarious and supportive of the wilder side of life. I’m also widely curious about Hawk aka Loki, who is a close friend to Nate. He is a wonderful side character but I’d love to learn more about his past as well.

The actual plot is really entertaining as well, laced with suspense and wonderful details. I loved the fact that at the beginning of some chapters there are sections based around the killer, it adds to the suspense and  really drove me to keep reading because I simply had to know who the nut-job was. The artifacts that Cara inherits are very rare and very unique, and I’m more than little curious about the rest of the collection mentioned. I am such a fan of Exley’s writing! It felt rich and each little detail was woven in such a way that everything seemed visible and real.

I relieved this book in exchange for an honest review.