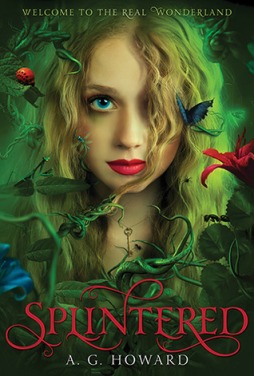 This stunning debut captures the grotesque madness of a mystical under-land, as well as a girl’s pangs of first love and independence. Alyssa Gardner hears the whispers of bugs and flowers—precisely the affliction that landed her mother in a mental hospital years before. This family curse stretches back to her ancestor Alice Liddell, the real-life inspiration for Lewis Carroll’s Alice’s Adventures in Wonderland. Alyssa might be crazy, but she manages to keep it together. For now.
When her mother’s mental health takes a turn for the worse, Alyssa learns that what she thought was fiction is based in terrifying reality. The real Wonderland is a place far darker and more twisted than Lewis Carroll ever let on. There, Alyssa must pass a series of tests, including draining an ocean of Alice’s tears, waking the slumbering tea party, and subduing a vicious bandersnatch, to fix Alice’s mistakes and save her family. She must also decide whom to trust: Jeb, her gorgeous best friend and secret crush, or the sexy but suspicious Morpheus, her guide through Wonderland, who may have dark motives of his own.

I’m not sure if I’ve ever mentioned my utter love for Alice in Wonderland retellings…I have no idea why I love them so much, since I have a love hate relationship with the actual book. I will watch, read, or play anything that is based on Alice no questions asked and I will absorb every detail. So perhaps it’s not really shocking that I ended up loving Splintered so much.

Having a dark Wonderland is nothing new, as the original was tinged with some dark moments, but the way Howard decided to incorporate the whole tale of Alice into the story is something I really appreciated. I love that Alice’s original visit to Wonderland did more than make her famous in the world, it left behind noticeable changes.  Alyssa is thrust into the middle of all of it in order to try and save her mother, and she definitely has her work cut out for her. Wonderland is a dark place filled with puzzles, promises, and secrets; and watch Alyssa and Jeb try to navigate all of it is a joy.

The familiar characters from Wonderland get a slight revamp and while they are clearly recognizable they take one a whole different vibe than the one we are use to. For those of you who find this unappealing I can assure you that there is an actual reason behind the change. Normally my favorite character is the Cheshire Cat but Morpheus (the Caterpillar) takes the cake with this one. He’s suave, mysterious, and well dressed…I mean what more can a  girl want? He is a tad damaged though and has a little issue with never giving the whole truth until convenient. Then of course there is Jeb, Alyssa’s best friend, who is incredibly loyal but unfortunately he got on my nerves because he’s over protective, even before they fall down the rabbit hole. You don’t have to take my word for it though, because there are plenty of people on Team Jeb. There is a slight love triangle but I personally didn’t mind it, given the different backgrounds/circumstances of the two boys it makes quite a bit of sense that there would be some attraction.

I think the best thing about this is the effect that Wonderland has on Alyssa. She tries so hard to avoid the things that make her think she’s loosing it, but when she’s surrounded by it she’s forced to deal and adapt. I love that there is more to her story than originally expressed and love that Wonderland appears to be a nightmare but has a lovely vibrancy to it. Given the rather closed yet open ending, I’m happy to see that there will be a sequel because I can’t wait to see what happens with everyone.

8 Responses to Splintered by A.G. Howard