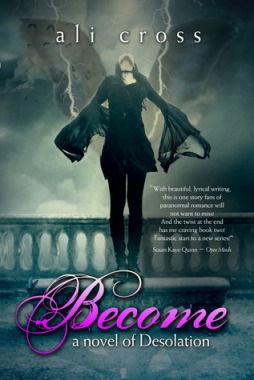 *
*I receive a small monetary kickback from Amazon purchases
Rating: 3/5

Sixteen-year old Desolation Black wants nothing more than to stay in Hell where it’s cold and lonely and totally predictable. Instead, she’s sent back to Earth where she must face the evil she despises and the good she always feared.

When Desi is forced to embrace her inner demon, she assumes her choice has been made—that she has no hope of being anything other than what her father, Lucifer, has created her to be. What she doesn’t count on, is finding a reason to change—something she’s never had before—a friend.

Can you believe it? An angel-type book that I didn’t immediately want to depose of after I finished it, amazing! It’s such a rare occurrence I feared I’d never find another one again, but here it is. It’s only a 3 star but that’s far better than most angel books fair in my hands…There was some issues I had with it, but overall I found it to be a satisfying read.

The plot itself is pretty unique when it comes to the lore used, because not only does it use Christianity but it pulls in a huge amount of Norse mythology. When I saw the name Loki pop up on the first page my heart soared and I kind of hugged the book…no joke. I have a huge love and appreciation for the old religions, so to see them in any novel makes me super happy. So basically the major canon from both religions are present. You have Odin/God, Loki/Lucifer, Helheimer/Hell, Valhalla/Heaven and so on and so forth. I think the mix of the two is kind of brilliant. The plot revolving around Desi is one that is a bit confusing at times due to the limited amount of information you are feed as the story progresses, but I will say I didn’t quite get the point of her being on Earth. I saw the point because it’s explained but I personally didn’t see why that route had to be taken when another route probably would have worked out better. I also liked the whole Remembering thing in regards to leaving and entering Hell. Basically you are forced to remember the deeds of your life, and I can imagine that for some that would be a horrifying experience.

Desolation or Desi, as she prefers to be called, is a strong-willed girl who is in constant battle with herself. She confused on who she is and even though she knows her destiny she doesn’t want it to come true. At times she’s the perfect contradiction to herself. She’s such a powerful girl both physically and mentally, but she doubts herself constantly and in a way makes herself seem less than what she is. I liked the fact that when it came down to it she could hold her own but her overwhelming self-loathing really brought it down for me. She also can get pretty arrogant at times, which fits but it was a bit eye-roll worthy. Miri is a great character and she reminds me of a certain prophet on Supernatural, she has her issues and her role in the whole story doesn’t really help but she comes through with some help. She’s likeable but I wish there were more interaction between her and Desi, more conversations or bonding experiences. Something to really back up the connection they have. Micheal is probably my least favorite character, and that’s simply because I was confused when it came to his part. Everything is explained over time and the holes are plugged but my impression of him didn’t really change.

Overall it’s a good novel and I plan on reading the second book Desolation when I get the chance.