Posted on September 21, 2012 by Michelle @ In Libris Veritas 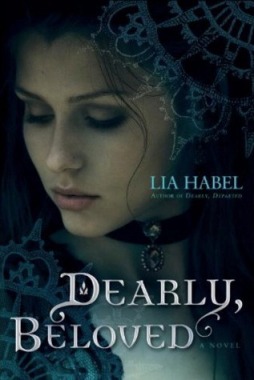 That’s the question that has New Victorian society fiercely divided ever since the mysterious plague known as “The Laz” hit the city of New London and turned thousands into walking corpses. But while some of these zombies are mindless monsters, hungry for human flesh, others can still think, speak, reason, and control their ravenous new appetites.

Just ask Nora Dearly, the young lady of means who was nearly kidnapped by a band of sinister zombies but valiantly rescued by a dashing young man . . . of the dead variety.

Nora and her savior, the young zombie soldier Bram Griswold, fell hopelessly in love. But others feel only fear and loathing for the reanimated dead. Now, as tensions grow between pro- and anti-zombie factions, battle lines are being drawn in the streets. And though Bram is no longer in the New Victorian army, he and his ex-commando zombie comrades are determined to help keep the peace. That means taking a dangerous stand between The Changed, a radical group of sentient zombies fighting for survival, and The Murder, a masked squad of urban guerrillas hellbent on destroying the living dead. But zombies aren’t the only ones in danger: Their living allies are also in The Murder’s crosshairs, and for one vengeful zealot, Nora Dearly is the number one target.

As paranoia, prejudice, and terrorist attacks threaten to plunge the city into full-scale war, Nora’s scientist father and his team continue their desperate race to unlock the secrets of “The Laz” and find a cure. But their efforts may be doomed when a mysterious zombie appears bearing an entirely new strain of the illness—and the nation of New Victoria braces for a new wave of the apocalypse.

In compliance with FTC guidelines, I received this book through Netgalley.com

Oh how good it feels to back in Habels’s world of neo-Victorian and zombie goodness. This picks up shortly after the first book finishes and immediately pulls you back into the word of New Victoria…which is having  a bit of a internal melt down. Like the first one it raises some rather interesting questions about the state and position of the sentient zombies in a normal society, and also like the first one it handles it with a good amount of realistic cause and effect. The plot focuses on things  a little closer to home for Nora and she finds herself in the center of another conflict. It was pretty clear from the way the last book ended that things were going to be very tense for the citizens of New Victoria, so this focuses on what all that tension gives rise too. The POV changes were numerous but since the first book is the same way it didn’t bother me as much this time around, though I still had problems with some of the characters.

Nora is still strong willed and independent and Bram is still the swoon worthy zombie he was in the first book, though he might be a tad more protective. Then there is Pamela…who i wasn’t fond of in the first book and she continues to be my least favorite. She’s a nervous wreck and most things that Nora does in this are met with her disapproval, no matter what they are. I felt bad for her because I know she’s been through a lot but I kind of wanted someone to shove her in a closet and leave her there until it was all over. Alister was just as much a creep as before, more so actually. His character has actually taken a turn for the worst and he’s even a bit disturbing now. Vespertine is the one character that I want to see more of in the next one, she’s strong and assertive and despite her need to remain aloof and kind of rude she’s rather reliable. She has to deal with issues no one really understands and I’d love to see more of her in the third novel. All of the other characters from the first book return and some even  get a bit of light shined on their history, which does end up a bit heartbreaking. There is one character, Laura, that I absolutely loved because of her flowers. She reminded me a bit of a sweeter and more zombified version of Poison Ivy, and I couldn’t help but think she probably looks amazing with flowers growing from her.

I’d definitely say this one was a bit of a roller-coaster in terms of speed and directions. It slows down a bit to give you time to breathe before sending you over the edge, and while you’re barreling along you get glimpses of upcoming twists but they don’t really register until you are experiencing it first hand. I’ll be buying an actual copy of this when I get the chance.

You can purchase Dearly, Beloved here on Amazon:

Other books by this author: