The Vincent Boys by Abbi Glines 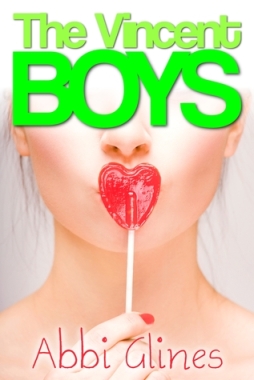 Being the good girl isn’t all it’s cracked up to be. Ashton Gray has grown weary of playing the part to please her parents, and to be worthy of the town’s prince charming, Sawyer Vincent. Maybe That’s why she’s found herself spending time with Sawyer’s cousin, Beau, while he’s away for the summer camping with his family. Beau is nothing like her perfect boyfriend. He’s the sexiest guy she’s ever seen, dangerous in ways she’s only day dreamed about, and the one guy she should stay away from.

Beau never envied Sawyer his loving parents, his big nice home, or his position as quarterback. He loves him like a brother. Which is why he’s tried everything in his power to keep his distance from Sawyer’s girlfriend. Even if he has loved her since the age of five, Ashton is Sawyer’s girl, so therefore she’s off limits. But when Sawyer leaves for the summer, Ashton, the one girl Beau would move Heaven and Earth for, decides she wants to get into trouble. Stabbing the one person who’s always accepted him and stood by him in the back, is the cost of finally holding Ashton Gray in his arms. Is she worth losing his cousin over?…. Hell Yeah.

This book kind of surprised me with how easy it is to get sucked into it. It’s plot is quick paced and I was done before I knew it. This isn’t something I normally read because I normally don’t enjoy the whole “girl falls for guy she ‘can’t’ have” thing, there is usually some story to go with it and make it bearable for me. My curiosity won though and I ended up loading this on my Kindle to try out, I certainly don’t regret it. It’s a pretty good read and I enjoyed it quite a bit, though it does have some issues here and there.

The overall story isn’t exactly original but I do enjoy how invested I became in Ash’s choices, and even though I kind of have some problems with him I enjoyed Beau’s character. The writing is fairly clean cut, a tad informal and super easy to read. It’s the ease of it that makes it addicting and hard to put down once you get going.

Ash is a good girl with a ‘bad’ streak and tries desperately to hide it so she can live up to everyone’s expectations. I can understand that, but there are some conversations that come up involving this that are just awkwardly worded or over stressed…and in the end every time Ash would state that’s she a bad person I just wanted someone to reach over poke her in the eye. Luckily it isn’t harped on the entire time. I also didn’t get why her mind still traveled to her boy drama during a rather sad situation, if something so heartbreaking had happened to me boys (no matter how hot) would be the last thing on my mind. Beau is…well he’s hot, there I said it…The guy is definitely swoon worthy, well for the most part. He’s also a bit over protective in what I think is meant to be endearing and sweet, but it comes off as a prelude to scary. I can understand a guy getting protective over his girl, but Beau likes to take that protectiveness to the level of yelling or punching the other person in the face. Some girls like that, I do not. He also uses his girlfriend, Nicole, which I think is pretty trashy no matter how you spin it. I still enjoy his character despite his few blow ups and screw ups, and I prefer him over Sawyer who was just a stick in the mud for me. I assume he has a personality but he pales in comparison to Beau, he’s not that fun and he seems way too good…well except toward the end. I know the next book focuses more on him so I’ll be interested to see if he’s fleshed out some more. This one has me on the fence really. I don’t like cheating even when it’s fictional, but I enjoyed Beau and Ash’s relationship which I think has a lot to do with the absence of Sawyer through most of the book. There are also a few odd conveniences that pop up that made me kind of frown. I don’t like when things are conveniently placed in a book so that it wraps up nicely, it’s not all that realistic and it takes a bit away from the story.

I love the small town charm that comes with this and it actually feels like the perfect cozy read partly because of that I think. It’s comfortable, simple and easy to read, so it’s also easy to enjoy and let yourself sink into.

You can purchase The Vincent Boys here on Amazon:

Other books by Abbi Glines:

2 Responses to The Vincent Boys by Abbi Glines