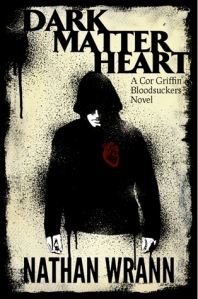 A new town. A new school. A new beginning. Seventeen year-old Cordell Griffin and his mother move from Los Angeles to the Pacific Northwest to deal with his “allergies,” and start a healthier new life. Cor has one goal: To blend in and be invisible. Unfortunately for him, no matter how far he goes, he can’t run away from his secrets. Secrets about who he is. Secrets about why he’s sick. And secrets about why so many people he meets end up dead, drained of blood.

In “Dark Matter Heart”, the origin novel in the “Cor Griffin Bloodsuckers” Young Adult Paranormal Thriller series from filmmaker Nathan Wrann, Cor must uncover the mysteries of his past and conquer the secrets of the present in order to protect the girl of his future, and save himself

It seems I have managed to find yet another enjoyable vampire novel, I’m hoping the luck lasts.

Dark Matter Heart starts on a rather curious note, with Cor surrounding himself in mystery right from the start. There are various little hints to his past and why his mom decided to move, but no clear explanation. There is also the fact that he doesn’t really act like a normal guy though it seems he’s trying his best…All of this really piqued my interest and I ended flying through this.
The writing is detailed but the plot is set at a fast pace, and paired with short chapters this book really seems to pick up speed as you read.  One issue I had with this were the more “unrealistic” events like the fact that there is a significant amount of hacking going on, don’t get me wrong it happens and there are some super nifty teens out there…it just felt a little weird to read. To be fair it was written in a believable way and the reasoning was also understandable, just something about it threw me off.I love the way vampirism is portrayed in this though. It connects to the lore quite well and it also doesn’t make it out to be some wonderful existence that bares no consequences. It seems rather uncomfortable at times and even savage at some points. Which is the way I like my vampires, I don’t want them to have a super wonderful time and have fangirls around every corner. That’s just boring. Another wonderful thing about this is the action, it’s not abundant but when it does occur…wow. Wrann really knows how to write a fight scene, especially toward the end.

Cor is a great main character, even if he is a bit odd personality wise. He’s a quiet guy who is rather sickly, but he’s also quite capable of taking care of himself when he needs too.  I have to give it to the guy, he’s pretty brave when it comes down to it. Taylor is also a pretty cool character and quite handy with tech, I like he’s kind of overactive personality and how he’s a bit obsessive over news. It’s weird but it’s quirky. Caitlyn is where my second issue lies, though it doesn’t have to do with her personality. She’s an enjoyable side character but I don’t quite get the whole “attraction” thing that occurs, it feels rather convenient I suppose. Trace and the other football players are quite the inclusion and boy did I hate them, I don’t think I’ve ever see high school kids that mean but they were quite believable as bullies.

Overall I found this quite good and I’m glad I got the chance to read it. I’m hoping to get around to the second one sometime soon because this one left me with a few questions that I would answered.

You can purchase Dark Matter Heart here on Amazon:

Other books by this author: