Steampunk! An Anthology of Fantastically Rich and Strange Stories 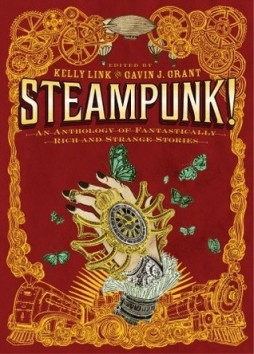 Imagine an alternate universe where romance and technology reign. Where tinkerers and dreamers craft and re-craft a world of automatons, clockworks, calculating machines, and other marvels that never were. Where scientists and schoolgirls, fair folk and Romans, intergalactic bandits, utopian revolutionaries, and intrepid orphans solve crimes, escape from monstrous predicaments, consult oracles, and hover over volcanoes in steam-powered airships. Here, fourteen masters of speculative fiction, including two graphic storytellers, embrace the genre’s established themes and refashion them in surprising ways and settings as diverse as Appalachia, ancient Rome, future Australia, and alternate California. Visionaries Kelly Link and Gavin J. Grant have invited all-new explorations and expansions, taking a genre already rich, strange, and inventive in the extreme and challenging contributors to remake it from the ground up. The result is an anthology that defies its genre even as it defines it.

More YA steampunk! Please! One thing that I realized after finishing this was that there is simply not enough in the way of YA steampunk, or maybe I’m seriously out of the loop. In which case I plan on finding some and devouring them as soon I get the chance. This was almost like one of those really awesome sampler appetizers where you get a little bit of this and that, and in the end you end up satisfied but mentally you are making a note to order something like it again. There is a great sampling of different styles, time periods, advancements, and opinions; all packed into a super pretty cover.

There is a total of 14 stories some by well known authors like Libba Bray, Cassandra Claire, Garth Nix, and Holly Black; as well as some by lesser known but equally talented authors like Dylan Horrocks, Elizabeth Knox, Cory Doctorow, and Delia Sherman. As a whole the book is fantastic and as with most anthologies it’s a great way to get a taste of writing from a lot of different authors. I know I’m going to be keeping an eye on a few of them so I can find some of their full books later.

I’ll try to keep this relativity short and highlight only those that made an impression or I thought cool. My overall favorite story would have to be Clockwork Fagin by Cory Doctorow, it’s a rather great story about the ingenuity of children. It’s really touching and I loved how they pulled things together for themselves. A few others stick out as well: The Last Ride of the Glory Girls by Libba Bray is really interesting and I loved the whole “western” feel of the story. This is the second short story by Libbra Bray that I’ve read and I’m still impressed.  Oracle Engine by MT Anderson was an almost alternate history story that takes quite a bit of ancient history and adds a steampunk twist that gives it a fantastic edge, it’s actually more truth than fiction when you truly think about it. Then there is The Ghost of Cwmlech Manor that I thought was a great in that the story wasn’t entirely steampunk related and that there was a bit of a paranormal aspect added.There are also two “comics” that I thought were an awesome inclusion and kind of gives you a bit of a break from the lengthier stories.

I didn’t really have any issues with the stories as whole. There were a few that barely have any steampunk additions to the story so I felt kind of odd reading them but they were still good stories though just a bit out of place. So this is definitely worth checking out if you have the time  or if your are simply curious about the steampunk genre. It’s a great starter book for sure.

You can purchase Steampunk! here on Amazon:

Steampunk!: An Anthology of Fantastically Rich and Strange Stories

Other books by the authors: