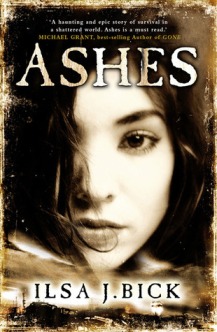 It could happen tomorrow . . .

An electromagnetic pulse flashes across the sky, destroying every electronic device, wiping out every computerized system, and killing billions.

Alex hiked into the woods to say good-bye to her dead parents and her personal demons. Now desperate to find out what happened after the pulse crushes her to the ground, Alex meets up with Tom—a young soldier—and Ellie, a girl whose grandfather was killed by the EMP.

For this improvised family and the others who are spared, it’s now a question of who can be trusted and who is no longer human.

Author Ilsa J. Bick crafts a terrifying and thrilling novel about a world that could be ours at any moment, where those left standing must learn what it means not just to survive, but to live amidst the devastation.

Ashes is certainly a unique version of the well known and feared creature known as the zombie. It uses the basic para-dime of flesh eating humans but it also expands on the idea and gives you something more then just mindless abominations.

I love how this book starts off, it’s not the same as other books where everything is perfect and then goes to hell…instead you get a main character who already thinks she’s in hell and with good reason. You immediately feel for Alex and her situation, but just when you are getting use to the pace it suddenly revs up. I’ve read one other zombie book that mentions the use of EMPs and in that one it didn’t add much to the story, but that’s not the case here. Ashes is based solely around what happens after a massive EMP hit and the direct effects of it on our world. The zombies are far more animalistic instead of mindless and it gives them an extra eerie quality that makes you realize that normal zombies are easier to deal with.

The writing is certainly a different style and it makes it a little more personal as you read it. There were moments that I hated though, at times the reader is completely excluded from conversations and so you feel left out of the loop while everyone else knows what’s happening. It really bothered me and I don’t think it really added too much to the story, you end up having to figure it out for yourself or having to wait until someone happens to mention whatever it was. I love the “superhuman” element that was added, it gives a new depth to the story and it’s really unique in it’s execution. Emotions in this book are also something that was handled fantastically, and it does a great job of evoking them in the reader as well. A fair warning though, it has some fairly brutal moments that are meant to make you cringe. There was one main incident of direct violence on a dog that really got me, and the others were some what tamer but if that is something you don’t think you can handle then I suggest not reading this. I felt that it is meant to be horrific in cases and so all I can suggest is to be prepared for some gore, most of it is not sickening but it is there.

The main character, Alex, is one tough girl and I really feel for her right from the beginning. Her back story is unique and rather sad but it gives her an emotional edge when it comes to survival. Ellie is possibly the most annoying little girl I’ve ever read about but since she’s so young it’s kind of understandable. There were times where I questioned her age but it was few and far between. Tom was also a fantastic character and felt that he and Alex had a great base to being with. I enjoyed reading about the connection between Alex and Tom, and I felt that their relationship was both real and interesting. The village of Rule as a whole was one that I didn’t enjoy it, which is probably just because it was so strict and orderly. For me it made the second half of the book kind of boring and I just want Alex to move on somewhere else. It makes perfect sense in the storyline, I just personally found it to be a drag. I did not enjoy the character Chris or his part in the story. It seemed odd and his relationship with Alex was kind of tossed out of the blew at me. I just wanted him and Rule to disappear.

The last few chapters were oddly confusing for me and I’m still not quite sure what’s happening or what’s going to happen with Alex. It did however make me want to get the second book when it is released. Overall it was enjoyable but a few things kind of held it back for me.