Review: Every Other Day by Jennifer Lynn Barnes 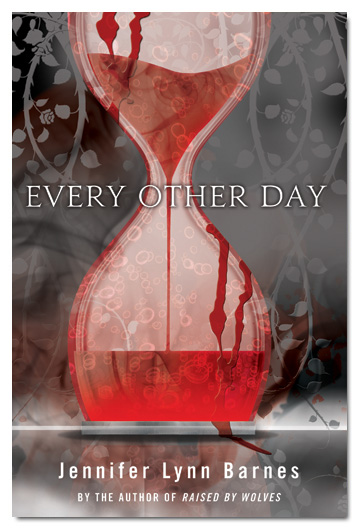 Every other day, Kali D’Angelo is a normal sixteen-year-old girl. She goes to public high school. She attends pep rallies. She’s human.
And then every day in between . . .She’s something else entirely.
Though she still looks like herself, every twenty-four hours predatory instincts take over and Kali becomes a feared demon-hunter with the undeniable urge to hunt, trap, and kill zombies, hellhounds, and other supernatural creatures. Kali has no idea why she is the way she is, but she gives in to instinct anyway. Even though the government considers it environmental terrorism.
When Kali notices a mark on the lower back of a popular girl at school, she knows instantly that the girl is marked for death by one of these creatures. Kali has twenty-four hours to save her and, unfortunately, she’ll have to do it as a human. With the help of a few new friends, Kali takes a risk that her human body might not survive. . .and learns the secrets of her mysterious condition in the process.

In compliance with FTC guidelines, I received this book through Netgalley.com

Where to start? I really enjoyed this book a lot. It’s the perfect type of paranormal book for me because I really dig the supernatural hunter plot line and it’s not really one that you see a lot now. Usually it’s a damsel in distress who is forced into being an opponent for the supernatural, but not in this case. In this book you are given a kick ass girl who knows how to take down a supernatural creature and make you wish that you had that much skill. Of course there is the equally awesome and original aspect of her being human every other day, which makes me love Kali even more. Normally I don’t like main characters who are hard and unfeeling all the time, but with Kali you get a sense of vulnerability from her.

The fact that she has to battle with supernatural beasties and do it in a time limit really puts you into a time conscious mindset and I became antsy when she would mention the time. A time limit always manages to add a certain kind of anxiety and when you add it to a book it can either be irritating or integrated perfectly, and I’d say this was perfect. The only reason that I didn’t give this a full five stars is because I wish the story time line had been a little longer, I understand that with her being on a strict schedule she has to work fast but it comes off as really unbelievable at times.  And of course there is another aspect that pretty much pulled me in and that was the aspect of alternate history. It’s not a huge, huge part of the story but it’s mentioned enough and it plays a part in the set up. I really felt that it was a genius sort of integration for the preternatural creatures. I just wish some part had been explained a bit more at the end and not as quickly. I really enjoyed Skyler and her opposite Bethany, they are perfect to counterbalance each other and their banter was pretty entertaining at times. Zev however fell a little flat, I wanted more from him. I think if the time line had been extended and more time was spent fleshing out his position in the story he would have been a hit. But as is he’s just kind of a smexy plot piece.

Overall I really loved this and I do plan on reading other books by Barnes, and I’m hoping that there will be more to Kali’s story. I recommend this to supernatural fans who don’t mind some gore. It’s a great quick read and definitely worth a try.

You can order a copy here: Amazon