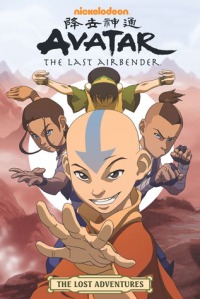 One of America’s hottest shows returns! For three years, millions of eager fans tuned in each week to watch Nickelodeon’s hit animated series, Avatar: The Last Airbender. Ever since, fans have been hungry for more – and now their wait is finally over! This volume collects the long-out-of-print, fan-favorite comics previously published in Nickelodeon Magazine and with the Airbender DVDs, plus over 70 brand-new comics pages. That’s over 26 stories set in Airbender continuity, by a host of top-notch talent, many of whom worked on the original animated series itself.

I love the Avatar series! I personally think it’s one of the most thought out and beautiful cartoons on tv right now. So when I saw the opportunity to read this I just had to try, luckily Dark Horse and NetGalley let me and I’m so happy they did!

This is a must for any Avatar fan! These stories take place in between the episodes and are great additions to the show. I admit there were times where I wanted to know how they did certain things and a lot of those questions were answered here. Not to mention some really great “what-ifs” were answered too. Some of these were simply awesome! For instance have you ever wondered what would happen if Bumi and Toph fought? How they managed to get a Fire Nation Navy ship in the third season? Or maybe you were wondering what happens when Aang gets a cold…Trust me these are worth reading. They are really enjoyable stories but you won’t find a lot of the same depth in most of them. There is even a cute story about the bender-creation contest that the creators held, which I thought was amazing for them to do.

The book is separated into the seasons of the show and the stories in chronological order which really helps you place where each little story goes in the timeline. Some of the artwork is very familiar and others are little more sketchy and rough around the edges, but for me it didn’t diminish the book any. it actually made it more enjoyable because you can tell just how many people actually put work into this series. At the end they include some numerous sketches and some stunning background artwork for the show, which is a nice added bonus for those who like the show visually.

I recommend this for fans of the show, especially the younger ones who are sure to enjoy it. I’ll definitely be buying this once I get the chance.

I received this in exchange for an honest review: